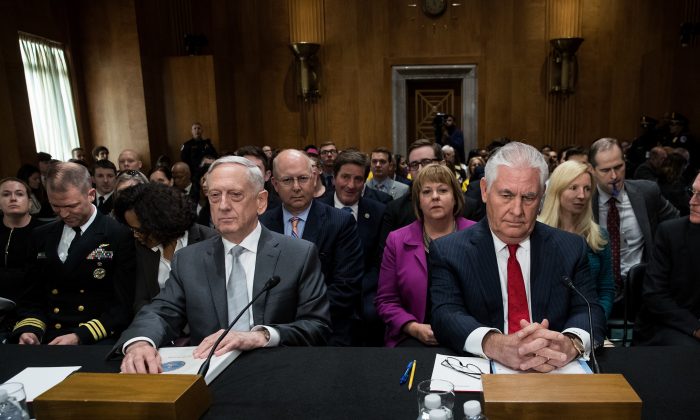 (L to R) U.S. Defense Secretary Gen. Jim Mattis and Secretary of State Rex Tillerson take their seats as they arrive for a Senate Foreign Relations Committee hearing concerning the authorization for use of military force, in Washington, D.C. on Oct. 30, 2017. As Mattis and Tillerson face questions about the administration's authority to use military force, Congress is still seeking more information about the deadly ambush that killed four U.S. troops in Niger. (Drew Angerer/Getty Images)
US News

Trump administration officials insist that the current U.S. military operations against ISIS and other terrorist groups are still covered by congressional authorizations that were passed in 2001-2002, dismissing the growing calls for the administration to seek a renewed authorization from Congress.

Defense Secretary Gen. Jim Mattis and Secretary of State Rex Tillerson told a Senate Foreign Relations Committee hearing on Oct. 30 that the 2001 and 2002 Authorizations for the Use of Military Force (AUMF), which Congress intended to be used against al-Qaeda and the perpetrators of the Sept. 11 attacks, are still valid today in justifying the ongoing wars against ISIS and other terrorist groups.

“The 2001 and 2002 authorizations to use military force…remain a sound basis for ongoing U.S. military operations against a mutating threat of [terrorism],” said Mattis, “A new AUMF is not legally required to address the continuing threat posed by al-Qaeda, the Taliban, and ISIS.”

Similarly, Tillerson argued that the terrorist enemies of today are a continuation of the old ones that the United States have fought against. Should Congress decide to write a new AUMF, however, Tillerson said it should not repeal the old ones, so as not to cause operational paralysis and confusion in U.S. military operations.

Tillerson also stressed that any new AUMF should not be time-constrained or geographically restricted, which he argued would not be appropriate considering the global nature of terrorism, which evolves rapidly over time.

“We are more likely to win this fight sooner if we don’t tell enemies when we would stop fighting,” said Tillerson.

This latest statements from Trump officials are a continuation of the established view from previous U.S. administrations, which has been increasingly challenged by many in Congress and also a number of constitutional scholars.

During the hearing, Sen. Jeff Flake (R-Ariz.) pointed out that none of the senators of the Foreign Relations Committee present that day voted for the 2001 AUMF or its 2002 version. “We can’t continue to go on in a situation where 70 percent of the House and the Senate has never voted on an AUMF,” said Flake.

Sen. Tim Kaine (D-Va.), who had called for Congress to pass a new AUMF during the Obama administration, criticized the lax interpretation of AUMF by the current and preceding U.S. administrations. They had effectively created “an endless war with no congressional vote against newly formed terrorist groups all over the world,” Kaine said. Such a war could go on “forever.”

Monday’s hearing also raised the question whether the 2001 and 2002 AUMFs give any congressional authorization to the president to use force against North Korea, the regime that has caused rising tension in the region in the last few months with its latest string of nuclear tests and missile launches.

In response to a question from Sen. Ben Cardin (D-Md..), Mattis and Tillerson agreed that Trump does not have congressional authorization to strike North Korea. However, Mattis noted that Trump still has the constitutional ability to do so in case of an imminent or actual attack from the aggressive regime.

“Under Article II, he has a responsibility, obviously, to protect the country,” Mattis said, discussing a scenario where Trump would initiate a strike against North Korea without first consulting Congress. “In the case of North Korea, it would be a direct imminent or actual attack on the United States. I think Article II would apply.”