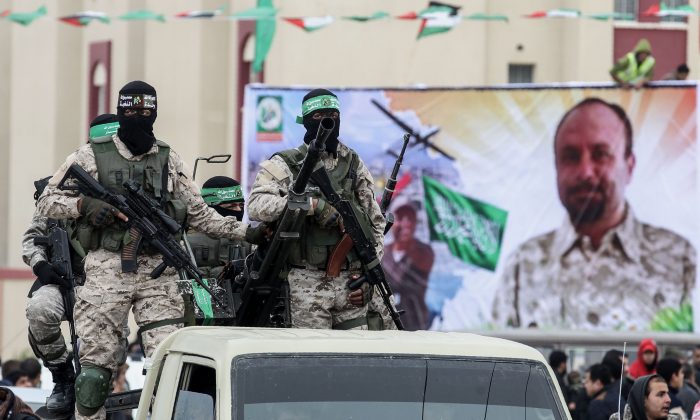 Members of the Izzedine al-Qassam Brigades, the military wing of the Palestinian Islamic terrorist group Hamas, attend a memorial in the Gaza Strip on Jan. 31, 2017. (Said Khatib/AFP/Getty Images)
Middle East

War on Terror Shifts to Attacks on Finances

The war on terrorism is changing form, moving from battlefields to courtrooms and from bullets to the finances that make terror attacks possible.

In Afghanistan, on Nov. 19, the U.S. military bombed 10 of the Taliban’s opium production factories, as part of new operations to target terrorist revenue streams.

The actions pull from a tried and true method of combating terrorism, which aims to collapse the organizations at their foundations by disabling a complex web of front money-movers, organized crime, and “charity” front operations.

“You see that the current organizations are evolving, thinking of new strategies, new ways to fight the West, and we have to fight back in similar ways—we have to think out of the box,” said Nitsana Darshan-Leitner, president of Shurat HaDin, a Tel Aviv-based law center that represents the families of terrorist victims.

According to Darshan-Leitner, the method of attacking the financial lifeblood of terrorist groups is among the most successful methods used by Israel, and the Israelis have been working to pass it on to the United States and its allies.

She presents the history of the Israeli intelligence operation behind this strategy in her new book, “Harpoon: Inside the Covert War Against Terrorism’s Money Masters,” co-authored by New York Times bestselling author and documentary filmmaker Samuel M. Katz.

The method was developed by the late Meir Dagan, the former director of Israel’s intelligence agency, who was nicknamed the “King of Shadows.” In 1996, Dagan formed Harpoon as a financial counterterrorism task force of soldiers, special agents, hackers, accountants, and lawyers.

Darshan-Leitner said in a phone interview that Harpoon had one goal: “to go and choke the oxygen that drives the terror organizations.” This was embodied in the agency’s slogan of “follow the money, target the money, and kill the money.”

It wasn’t long before the Israeli agents were knocking on the doors of U.S. agencies to inform them of terrorist finance networks in the United States. This included charities run by the terrorist group Hamas to finance its attacks, and a Hezbollah counterfeit operation that had amassed close to $50 million.

“But everybody ignored it,” said Darshan-Leitner. The focus then was on the terrorists calling the shots and carrying out the attacks, not on the financial enablers.

The attitude changed, however, after the terrorist attacks on Sept. 11, 2001, and it became clear that the war on terror wasn’t just an Israeli problem. And soon, the United States was collaborating with the seasoned Israelis to see how they fought terrorism.

“Israel and the United States learned long ago that there are no white collar jobs in the terror organizations—that if you move money, you become a target,” Darshan-Leitner said.

The method has been instrumental in helping to curb attacks from the Palestinian Authority, and the Palestine Liberation Organization before it. These terrorist organizations compensate families of people who carry out suicide attacks on Israelis, and the more people the attackers kill, the more their families get paid.

“If terrorists know that once they blow themselves up, there will be nobody to take care of their families, they will really consider whether to do it or not,” Darshan-Leitner said. “A lot of this funding encourages terrorists to carry out attacks.”

During the 2014 Israel–Gaza conflict, Hamas was running short on funds, and families of combatants were complaining to the terrorist group about the lack of pay. Darshan-Leitner said, “They were desperate, so eventually Hamas sent the money-men to Iran.” One of the Hamas men received $13 million in suitcases from Iran, “and then Israel targeted the person, shot missiles at his car, and took him down.”

Soon after the money was lost, Hamas negotiated a ceasefire with Israel.

Harpoon used similar approaches to prevent Iran from developing nuclear weapons. Dagan regarded a military attack on a nuclear system as a last resort, and turned instead to short-of-war options, including financial sanctions, diplomatic pressure, cyberattacks, and direct assassinations of Iran’s nuclear scientists.

According to Katz, the methods are quickly becoming the new face of warfare. He said in a phone interview, “The interesting thing about warfare is when someone creates a new level, a new dimension, in how conventional and unconventional campaigns are raised.”

He noted that the story of Dagan and others who developed the new warfighting methods is worth a close look. “These were individuals who had spent their lifetimes fighting Israel’s wars, fighting terrorism,” Katz said.

One of the mistakes that governments have made in terror is that they look at the ideology or religious end, and not the business.
— Samuel M. Katz, co-author, ‘Harpoon: Inside the Covert War Against Terrorism’s Money Masters’

Some operations dealt with issues that weren’t as simple as they may have appeared on the surface. He noted that when Harpoon tracked Hamas finances to charity organizations, many of which were based in the United States, the charities were often providing services to its citizens that Hamas refused to provide.

Yet, while Hamas kept its charitable and militant wings separate, Katz noted, the aid to civilians went with a price. “The price of allegiance to this organization was waging a ‘holy war,’ and it was a ‘holy war’ that resulted in countless suicide bombings on Israeli civilians,” he said.

Katz said the actions of Harpoon to stop the flow of finances “became a very successful tool” in ending many terror campaigns of Hamas and Hezbollah.

The new methods also opened up new ways of understanding threats and how to prevent them. With suicide bombers, Katz noted that the people carrying out the attacks are rarely the only ones involved. Behind the suicide bombers are the military organizers who pay the bomb builders, the money needed for the facility and equipment to create the bombs, and the money needed to compensate the families of the terrorists.

If finances are removed from the equation, the whole system unravels. This may not prevent the individual self-starters, Katz said, but “the well-funded, sleek, secretive, highly capable terror cells launching from overseas are something the financial campaign has been capable of stopping.”

“There is a lot of money to be made in terror,” Katz said. “I think one of the mistakes that governments have made in terror is that they look at the ideology or religious end, and not the business.”

He said that it would be effective to look at terror “as a criminal enterprise that could be defeated with money.”