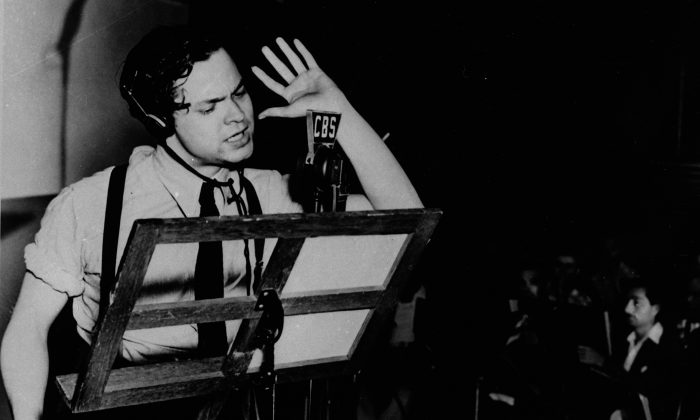 Orson Welles broadcasts "The War of the Worlds" in a New York studio at 8 p.m., Sunday, Oct. 30, 1938. The realistic account of an invasion from Mars caused thousands of listeners who had missed the beginning of the broadcast to panic (AP Photo)
US

On the 75th “War of the Worlds” anniversary, reports are reflecting on the panic the radio broadcast brought to the United States.

Director and actor Orson Welles interrupted the Columbia Broadcasting System’s normal programming to say that Earth was being invaded by aliens.

“Without waiting for further details, thousands of listeners rushed from their homes in New York and New Jersey, many with towels across their faces to protect themselves from ‘gas’ which the invader was supposed to be spewing forth,” reads an excerpt.

Bob Sanders, 81, recalls when the broadcast was carried out.

“William Dock saw the water tower in the moonlight, thought it was a spacecraft,” he told NJ.com from his home in West Windsor, N.J. “He took a couple shots at it with his double-barreled shotgun.”

Sanders recalls that “we sat down and listened to it on the radio” on Oct. 30, 1938, and “some of the local people put their families in their cars and drove out of town.”

NPR points out that around 12 million people were listening to the broadcast when “War of the Worlds” came on the air. Around one in 12 million people believed that it was true. However, it cites another report from Slate.com saying that the “supposed panic was so tiny as to be practically immeasurable on the night of the broadcast.”

“This is the most famous media event in history,” American Experience Executive Producer Mark Samel told Mashable.com. “It showed us that fear can overcome even the most rational parts of our brains.”