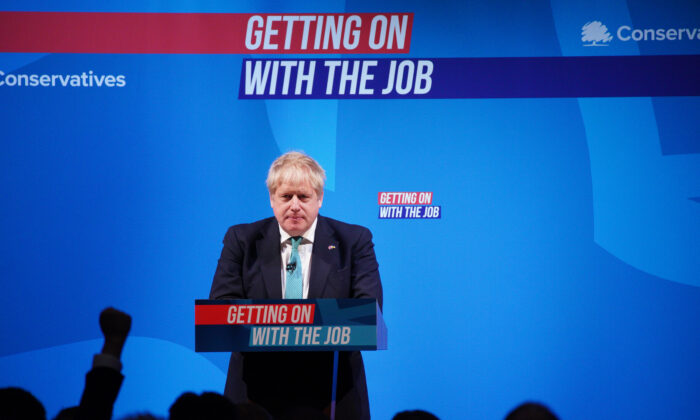 War in Ukraine ‘Turning Point for the World’: Boris Johnson

The Russo-Ukrainian war is a “turning point for the world,” the UK’s Prime Minister Boris Johnson said on Saturday.

Speaking at the Conservative Party’s Spring Conference in Blackpool, Johnson described the current time as a “moment of choice” when the world chooses between “freedom and oppression.”

Reflecting on the reason why Russian President  Vladimir Putin decided to invade Ukraine, Johnson said he believes it’s not about Ukraine joining NATO or “the semi-mystical guff [Putin] wrote about the origins of the Russian people,” but because Putin was “frightened” of the Ukrainian example of “freedom and democracy and open markets” and in a “total panic” about the prospect of a revolution in Moscow.

“With every year that Ukraine progressed—not always easily—towards freedom and democracy and open markets, he feared the Ukrainian example and he feared the implicit reproach to himself,” Johnson said of the Russian leader.

“Because in Putin’s Russia you get jailed for 15 years just for calling an invasion an invasion, and if you stand against Putin in an election you get poisoned or shot,” he said.

“It’s precisely because Ukraine and Russia have been so historically close that he has been terrified of the effect of that Ukrainian model on him and on Russia.”

Johnson also said the lack of free press and meaningful oppositions in Russia has led Putin down the path of war.

In a real democracy, Putin would not have “locked himself in this echo chamber of sycophants” because he would have to face a “real Parliament with real backbenchers” who had to face an electorate, Johnson added.

The prime minister also described the current war as a “turning point for the world” because “a victorious Putin will not stop in the Ukraine.”

“The end of freedom in Ukraine will mean the extinction of any hope of freedom in Georgia and then Moldova. It will mean the beginning of a new age of intimidation across the whole of Eastern Europe, from the Baltic to the Black Sea,” he said. “And if Putin succeeds in crushing Ukraine, it will be the green light for autocrats everywhere, in the Middle East in the Far East.”

“It’s a moment of choice. It’s a choice between freedom and oppression,” he said.

“I know there are some around the world, even in some Western governments … who say that we’re better off making accommodations with tyranny. I believe they are profoundly wrong. And to try to renormalize relations with Putin after this, as we did in 2014, would be to make exactly the same mistake.”

Johnson said that while Putin “wants to weaken the collective will to resist by pushing up the cost of living,” the UK government must continue to do “everything they can” to help people, and also make sure there is a “strong economy and strong economic fundamentals with well-paid jobs.”

He went on to say the UK must end its dependence on Russian energy and “make better use of our own naturally occurring hydrocarbons” after “years of short-termism, and hand-to-mouth solutions.”

But he stressed it does change the government’s agenda of achieving a low-carbon future, adding the UK will “make some bets on nuclear power” and invest more in offshore wind farms and other power sources.

The prime minister’s comments came after the British Ministry of Defence (MoD) says that Russia “has been forced” to change its operational approach in Ukraine “and is now pursuing a strategy of attrition” and that Kremlin has tightened its grip on Russian media.

The new strategy of attrition “is likely to involve the indiscriminate use of firepower resulting in increased civilian casualties, destruction of Ukrainian infrastructure, and intensify the humanitarian crisis,” MoD said in its latest intelligence update on Saturday morning.

“Putin has reinforced his control over Russian domestic media. The Kremlin is attempting to control the narrative, detract from operational problems, and obscure high Russian casualty numbers from the Russian people.”

Also speaking at the Tory conference on Saturday, Secretary of State for Foreign, Commonwealth, and Development Affairs Liz Truss said the UK’s effort in helping Ukraine should end the “ludicrous” domestic debates on things like pronouns.

“This is what is important, this is what matters,” Truss said. “We have to be proud of our country and our longstanding commitment to freedom and democracy.”

The foreign secretary said it’s time for the UK to “end the culture of self-doubt, the constant self-questioning, and introspection—the ludicrous debates about languages, statues, and pronouns.”

“Our history, warts and all, is what makes us what we are today,” she said.

Johnson also added that freedom is an “invincible strength” that makes the UK attractive.

“We believe, by and large and within the law, that people should be able to do whatever they want, provided they don’t do any harm to anybody else,” he said.

“That’s called freedom. And we don’t need to be woke, we just want to be free.

“That’s why talented people are fleeing Russia, quite frankly, right now. That’s why they are flocking to the UK.”