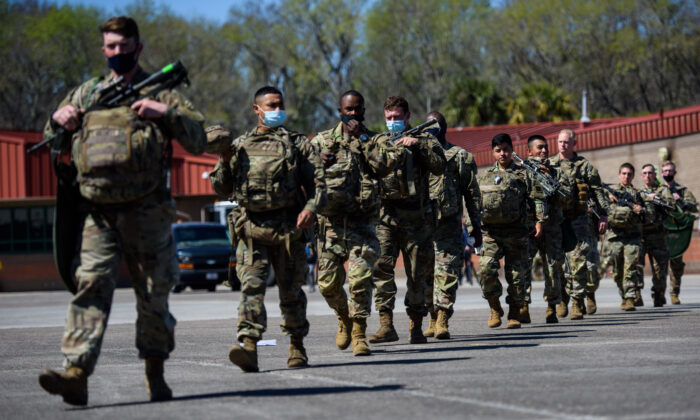 War in Indo-Pacific Could Reach US Mainland: Army Secretary

The next war that the United States fights could see hostilities erupt in the American homeland, according to the Army’s top two leaders.

“If we were to get in a real shooting war, our homeland would be part of the theater.”

The comments came amid a discussion of the role of the U.S. Army in the Indo-Pacific, and as tensions rise between aggressive regional powers such as China and North Korea with the democratic nations of Japan and South Korea.

Wormuth said that the United States’ nuclear arsenal was key to preventing a war from erupting out of those tensions, even as the United States pivots some of its attention to Russia’s war in Ukraine.

“An important part of maintaining deterrence in this day and age is our nuclear triad,” Wormuth said. “That’s sort of the ultimate insurance policy. That’s something that our adversaries have to bear in mind, frankly, as they think about contemplating opportunistic aggression.”

Wormuth noted, however, that the Chinese Communist Party’s military wing, the People’s Liberation Army (PLA), was rapidly modernizing and expanding its forces, and presented a serious threat to both the stability of the Indo-Pacific and to the United States more generally.

“I’m quite concerned, obviously, about the PLA threat,” Wormuth said. “They have embarked on a very impressive 20-year effort to comprehensively modernize their military across every single service.”

“They have very impressive capabilities,” she added.

Wormuth noted advances in the PLA such as the reorganization of its strategic rocket force in 2016, and the modernization of its nuclear forces as contributing factors to its growing relevance on the global stage.

Despite these growing capabilities, Wormuth noted that the United States retained a vital advantage in the experience and professionalism of its own fighting force.

She added that the “human dimension” of the military should not be undervalued and noted that the United States military was coming fresh out of 20 years of combat experience and had superior training.

Conversely, the PLA has not fought a war since China’s attack on Vietnam in 1979.

Concerning the possibility of overt hostilities between the United States and China, the issue of a Chinese invasion of Taiwan was at the forefront of the conversation.

Gen. James McConville, Chief of Staff of the Army, spoke on the subject. He said that the PLA’s lack of training and combat experience would prove a weakness in any invasion attempt, which Taiwan or the United States could exploit.

“If you’re going to seize an island, that means you’re doing one of three types of operations, or maybe all three,” McConville said.

Like Wormuth, McConville stressed the difference in training quality and combat experience between the Chinese and American forces, and said that the United States’ non-commissioned officers, which form the backbone of the military, presented an important advantage.