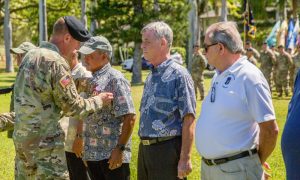 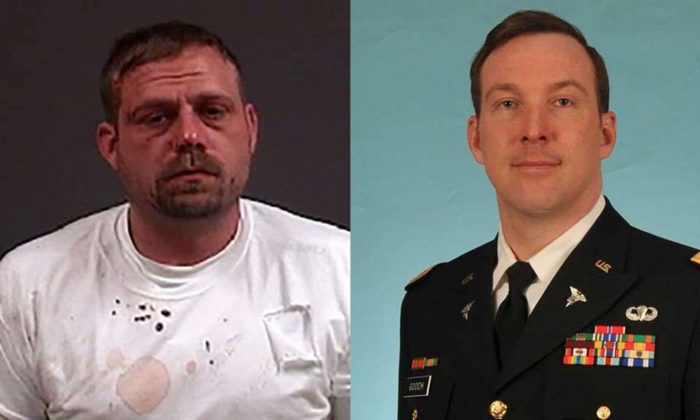 George Buschmann (L) was charged with first-degree murder in the death of Robert Gooch, an army veteran and father of three. (Chesterfield County Police)
Crime and Incidents

An Army officer was killed at a convenience store in Virginia in front of his teenage daughter, in what police said was a random act of violence.

Robert Gooch IV and his 13-year-old daughter were at a Wawa store in Chesterfield County on Jan. 8, according to the Richmond Times-Dispatch. They had stopped off at the store to get some popcorn, with plans to see a movie. Then, out of nowhere, gunfire rang out.

Police said Gooch was shot several times by 34-year-old George Buschmann, who then fled the scene.

The father-of-three was hit by multiple rounds and was taken to the hospital, where he succumbed to his wounds.

No motive has yet been provided for the shooting.

‘No Verbal Back and Forth’

Chesterfield police Capt. Jay Thornton was cited by the Times-Dispatch as saying that it appears that Gooch did not know the gunman, nor did they even interact.

“From what we can tell there was no argument,” Thornton said. “There was no verbal back and forth at all.”

The gunman’s vehicle, a stolen 2007 Toyota, was spotted the following day and an attempt was made to stop it. Buschmann did not heed demands to pull over, and led police on a chase. He was finally stopped after officers deployed spike strips.

The alleged gunman was taken into custody and has been charged with first-degree murder, use of a firearm in the commission of a felony, grand larceny of a motor vehicle, felony eluding, possession of a firearm after being involuntarily committed, and transporting a firearm while being subject to a protective order.

Buschmann had a criminal record that included violating a restraining order by a former spouse.

‘Calm and In Charge’

The victim’s father, Robert Gooch III, told the Times-Dispatch that his son was walking to his car when the gunman began firing. He said his son ordered his daughter to “get down” and call her grandfather.

“He’s an Army officer and he understands how to give orders and get things done,” Gooch III told the news outlet.

“He’s not somebody who would ever panic,” he added. “He was calm and in charge.”

Gooch had served multiple tours in Afghanistan, WTVR reported, where he worked logistics in the medical field as an officer in the U.S. Army Reserve.

Neighbor Faizan Habib remembers the slain Gooch as a helpful man and a loving dad.

“He was the first one to say ‘Hey, let me help you out. What do you need?'” Habib said, according to WTVR. “Robert was a fantastic guy. Very helpful, very loving to his kids.”

“He’s a war hero,” Habib said. “He had a few deployments overseas.”

Gooch served multiple tours in Afghanistan where he worked logistics in the medical field as an officer in the U.S. Army Reserve.

Members of his unit cited by WTVR called Gooch highly dedicated to his job.

Gooch leaves behind a wife and three children.

“He was always about making sure everyone was safe,” Habib added about his deceased neighbor. “He always had a smile on his face. We’re praying for his family.”