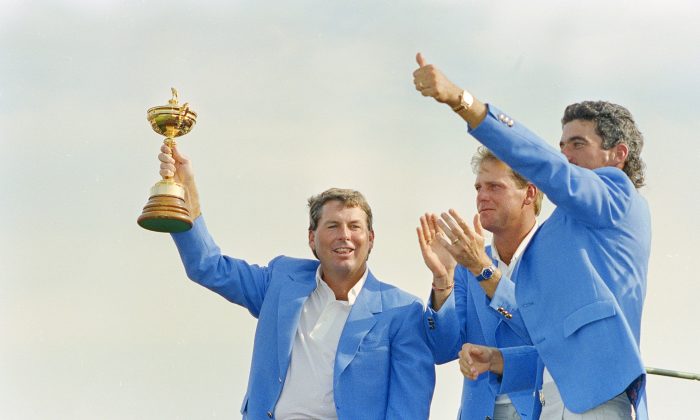 “War By The Shore” Revisited

Epic Win at Kiawah was 25 Years Ago
By M. James Ward

CHASKA, MN—It’s hard to imagine but 25 years have passed since the epic USA triumph over Europe in the Ryder Cup Match played on The Ocean Course at Kiawah. The imagery of Bernhard Langer in the final match anguishing over a barely missed six-foot putt that if made would have kept the Cup in European hands still resonates.

The contest was fueled by plenty of banter between the teams and for whatever strange reason the tagline, “War by the Shore” was affixed to the event. Given the reality American military personnel were deployed to fight to liberate Kuwait that same year via the mission name — Desert Storm — the atmosphere of that year’s Ryder Cup Matches were to say the very least tense and pressure-oriented.

The American side was under the most pressure.

Having not held the Ryder Cup since the 1983 matches — the American need to reassert itself was clearly a matter of pride and necessity. On the flip side — the European team consisted of top tier veterans — golfers such as Seve Ballesteros, Nick Faldo, Langer, Ian Woosam — who had beaten the USA for the first time on American soil in the ’87 matches at Muirfield Village and were intent on doing similarly four years later at Kiawah.

The site itself was also a big part of the storyline. Designed by the renowned Pete Dye, the course was rushed to completion and it’s remote location on Kiawah Island — roughly 40 minutes by car from the heart of Charleston, SC — provided a clear separation between previous USA sites which were generally established private clubs.

The Ocean Course was totally exposed to the daily vagaries of Mother Nature. Winds could easily blow in any direction at any velocity level off the adjoining Atlantic Ocean. Dye also made sure modern club and ball technology would not render the course obsolete in the years to come since the course could be extended to over 7,800 yards from the tips.

The American side was Captained by two-time PGA Champion Dave Stockton. Stockton was well-liked by his squad and his approach was the perfect blend of making sure players understood the urgency of what was needed but doing so without the heavy-handed authoritative ways which would only serve to add even more pressure to the moment.

The European side was led by first time Captain Bernard Gallacher. Gallacher was taking over the helm from three-time winning Captain Tony Jacklin. It was Jacklin who had re-energized a moribund European squad after its thrashing in 1981. With a new benchmark set it would be up to Gallacher to keep the momentum going.

Given the fact for the bulk of the Ryder Cup competition the American side had almost always won the bi-annual event there was a new belief that by adding golfers from the European continent in 1983 the dynamics of the series had been changed in a profound way.

The American squad had always relied in the past on the strength of the depth of its line-up. In earlier times the team from Great Britain and Ireland simply did not have the depth of talent to compete — especially in the final day of the singles matches. That had changed in the ’80’s with the emergence of Europe’s Fab Five — Ballesteros, Langer, Woosnam, Faldo and Sandy Lyle. Each of the aforementioned had won major championships and the era of American golf — long fixed on a key superstar such as Jack Nicklaus and Tom Watson — was more in the rear view mirror.

Interestingly, the matches would be the maiden journey for European players Colin Montgomerie and David Feherty. Monty would become a long time member of Team Europe and eventually serving as winning Captain in the  ’10 event in Wales. Feherty’s playing career would go in a different path — eventually having him leave the course for the broadcast booth and being quite successful in the process.

The Europeans deftly stacked their key players in the first two days of the competition — keeping the less experienced members of its roster on the sidelines. The foursomes and four-ball matches went to the advantage of the European with the tandem of Ballesteros and 25-year-old fellow Spanish countryman Jose Maria Olazabal leading the way in winning 3.5 points out of 4.

Going into the final 12 singles matches the match was all tied with 8 points per side. The pressure on the final day was overwhelming for some. American Mark Calcavecchia, the reigning Open Champion, sprinted to a four-up lead with four holes to play against Montgomerie. For whatever the reason, Calcavecchia could not close out the Scotsman and had to settle for a less than glorious tie with one-half point awarded to each side. The imagery of Calcavecchia hitting a golf shot into the water fronting the par-3 17th after Montgomerie had done so immediately before him is etched in golf’s collective memory in showing conclusively how a world class professional can succumb to pressure of the highest order.

As the final matches wounded down, the American squad gained momentum with stalwarts such as Fred Couples and Lanny Wadkins winning their respective matches. The outcome would be determined in the final match — between Langer and three-time U.S. Open champion Hale Irwin. The men were fully aware of the stakes. If Irwin could hold Langer to a draw or even win outright the American side would reclaim the Cup. For the Europeans the need for Langer to win was essential. That would mean an overall tie for the match at 14 points per team — but since Europe had already won the Cup two years earlier — that would mean retention for them.

Langer put himself in solid position for his six-foot putt that would determine the final outcome. With both teams perched on the green’s edge the German stroked what looked to be a winning effort. The ball failed to drop and the resulting pandemonium for the American side was overwhelming — the 800-pound gorilla placed on their back at the start of the matches was now lifted.

The matches at Kiawah were high level stakes — the resulting raw emotions stoked by both sides called into question the reasons why the matches were created in the first place as gamesmanship by players on both squad was in evidence.

This week’s encounter at Hazeltine National will clearly add to the lore and legacy of both the event and the players competing. But to equal Kiawah will mean coming down to the final match once again with everything on the line. The stakes are no less high now than they were 25 years ago on a beach fronting course along the South Carolina coast.