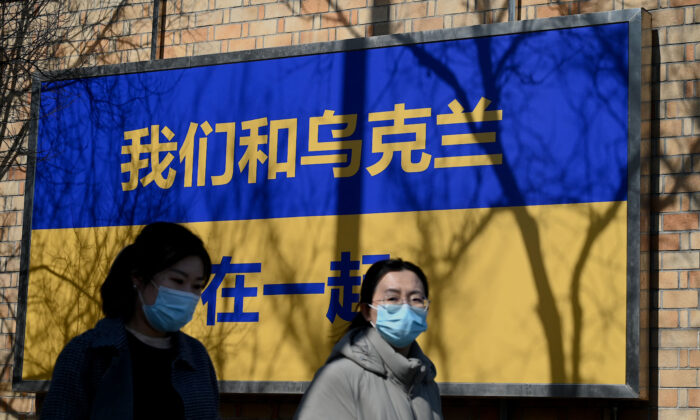 People walk past signage in the design of Ukraine's national flag with the message "We Support Ukraine" outside the Canadian embassy in Beijing on March 3, 2022. (NOEL CELIS/AFP via Getty Images)
Viewpoints

As European countries rally to better support Ukraine in fighting off the invasion of its homeland—with admittedly mixed results—European Union candidacy for Ukraine has yet again become a topic of conversation.

Last month, the EU gave Ukraine official candidacy status, beginning formal talks about possible membership. Yet Ukraine’s membership in the EU could spell serious trouble for the organization in the future—if this process is not handled delicately.

A Ukraine fit to be in the EU would be ideal. European countries have largely failed, with some exceptions, to provide the military and financial aid Ukraine needs and deserves. The EU needs to do more—and do better. Western European powerhouses—such as France and, above all others, Germany—have been particularly weak.

A divide between western and eastern EU member states is appearing, with the latter having taken a more realistic view of Russia and its future behavior after the Ukraine war concludes. Germany and France, meanwhile, seem intent on trying to ignore the ever more clear warning signs.

However, Ukraine is not trouble-free.

Much has been said comparing Russian actions in Ukraine to possible Chinese actions (and invasion) of Taiwan. It is becoming clear that greater leverage on the Chinese regime is needed to discourage it from acting rashly and doing something shortsighted, like launching an invasion.

That means raising the potential cost of any such invasion—to the level where the damage would be so great as to overshadow any potential positives. To do so, EU member states need to be able to act together. The EU, the world’s largest trading power, has immense economic power and is China’s most important trading partner—but a lack of cohesion often undermines its strengths.

We have seen the same with the Russia-Ukraine situation, in which one country, Hungary, manages to slow down, reduce, and weaken EU responses. Hungary and countries like Greece have been used the same way by China to weaken EU responses to Chinese acts of aggression or violations of international law in the past.

The EU is structured so that unanimity is needed for major decisions. Dictatorships know this well. Both Russia and China have used it by targeting one or two—often smaller—countries, making them feel dependent on them, and then ensuring that those countries veto any real action against them.

How will Ukrainian membership in the EU impact this situation?

It is true that Ukrainian President Volodymyr Zelenskyy, who has grown into arguably the greatest European statesman of our generation, has issued strong declarations of support for Taiwan. Likewise, even though language has been muted, Kyiv is certainly aware that Beijing is, to a large extent, funding Moscow’s invasion of Ukraine. Domestically, China shows clear support for Russia.

Upon conclusion of the war, with Ukraine hopefully returning to its 2014 borders and Russia defeated strongly enough to discourage further military adventures, it is unlikely that the current or future administration of Ukraine will forget the Chinese regime’s behavior. The Ukrainians are likely to adopt a more realist position on China, much like Eastern Europe did with Russia.

So what is the problem?

If the Chinese regime ever attempts an invasion of Taiwan, it will use an aircraft carrier sold to it by Ukraine—but the sale would have taken place long ago. However, until the COVID-19 pandemic, Ukraine was one of the world’s largest weapons exporters to China. It is not bound by the EU’s weapons embargo. In fact, almost 40 percent of its weapons exports go to China.

Ukraine has also been considered very unsafe for Chinese asylum seekers. Many have faced almost farcical bad asylum or extradition hearings, during which their guaranteed rights under the European Convention on Human Rights (ECHR) were utterly ignored—showing a country keen on appeasing Beijing. In fact, in the late 1990s, Ukraine followed Belarus in signing an extradition treaty with China, helping China gain legitimacy for its long-arm policing in a greater swatch of Europe.

Ukraine is no angel, or at least it was not in the past. Therefore, for the EU, the question now is not only how the current administration acts or feels, but how will likely future administrations act on the issue of China. And what is the general position of the population that elects these administrations? Years after this war is concluded and Russia is neutralized, the EU will start to face the real main threat—communist China. Can we trust that Ukraine will not, like Hungary, become another Trojan horse, weakening the EU and its ability to defend itself?

I sincerely hope these fears are unfounded, but they must be considered. After all, the damage was done by Hungary, if not fatal, is so severe that a similar Trojan horse cannot be allowed, no matter what.

This time around, EU leaders need to think ahead and realize that the quality of its members is what matters, not the quantity. Bigger is not always better. Let’s pray these concerns are unfounded, and we can welcome Ukraine into the EU as soon as possible.