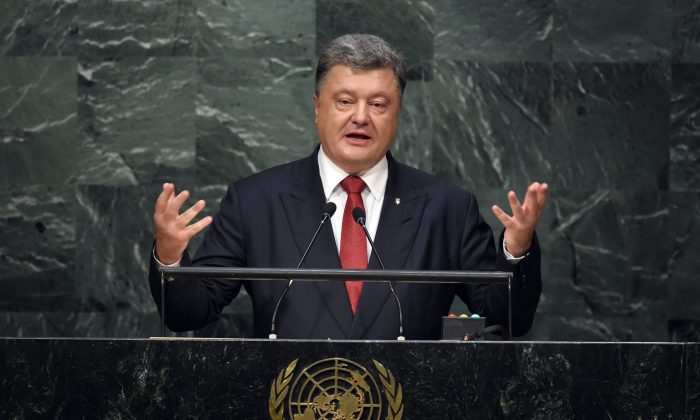 At the onset of Russia-backed separatism in early 2014, some in Donbas, eastern Ukraine would say, “Better to have our own stupid master than a smart foreign master.” It’s a spin on the Russian proverb about husbands—”Better your own idiot than a smart stranger.”

In announcing comprehensive reforms targeted at breaking the circle of “our people” and inviting foreigners to lead the country, President Petro Poroshenko is not taking such proverbs to heart. Instead, he has pursued a skilled team, proposing a law last November to allow foreigners to take top government positions and simplify procedures for granting Ukrainian citizenship through fast tracking with presidential approval.

The move to invite foreigners into the government, while controversial, is an effective strategy for breaking corruption links and adopting new ideas.

Within a month of his proposition, three foreigners were appointed to Ukraine’s new government: U.S.-born Natalie Jaresko as finance minister, Lithuania’s Aivaras Abromavicius as economy minister, and Aleksander Kvitashvili of Georgia as health minister. Each was granted Ukrainian citizenship by presidential decree and joined a 19-member Cabinet, of which 15 percent is foreigners. In May, Poroshenko appointed the fiercely anti-Russian former Georgian leader, Mikheil Saakashvili, as governor of the strategic Odessa region. Back in Georgia, a chief prosecutor had indicted Saakashvili on the violent crackdown of peaceful demonstrators in 2007 among other charges. The International Prosecution Advisory Panel approved the indictment. As of August, Interpol refused to issue a warrant for the former Georgian president.

Appointment of foreign nationals to ministerial posts in Ukraine shocked the international community.

The appointment of foreign nationals to the ministerial positions in a notoriously corrupt, patriarchal, and patrimonial society came as a shock to the international community, evidence of Ukraine’s dire economic situation and Western pressures for reform. Incorporating foreigners, including the diaspora, into domestic politics is rare in post-Soviet countries. Prominent examples include Valdas Adamkus, president of Lithuania from 1998 to 2003 and again from 2004 to 2009, despite his U.S. citizenship, and Vaira Vike-Freiberga, president of Latvia from 1999 to 2007, who held Canadian citizenship.

Political analyst Volodymyr Fesenko questioned if the new ministers were prepared. “These people do not have any experience of how our government system works, and yet they will have to quickly decide how to reform it,” he said. Ukrainian politologist, Vadym Karasyov, called the three ministers “pigs in a poke,” in an interview with the newspaper Segodnya. In response to Saakashvili’s appointment, Georgia expert Lincoln Mitchell criticized the move for reflecting “a belief, on the part of Mr. Poroshenko, that in a country of well over 40 million people, there is not one person who is sufficiently smart, incorruptible, loyal to the president, and visionary enough to serve as governor of this key region.”

Supporters of the new law said outsiders would have fewer links to existing networks, which could facilitate anti-corruption reforms. Ukraine’s Deputy Minister of Foreign Affairs Danylo Lubkivskij, insisting there’s nothing wrong with expertise “made” abroad, drew an analogy with iPhones, pointing out, “Ee don’t make iPhones, but we use them and it is good for us.” Ironically, among the first parties in Parliament to approve the appointment of foreign ministers was “Self Reliance.” Yet, party members noted that they would prefer foreign experts to be of Ukrainian origin and at least from the diaspora.

The process is eased for placing foreigners in government posts, yet other sectors are under strict regulation.

While the process has been eased for appointing foreigners to government positions, other sectors are subject to strict regulations on hiring foreign nationals. Considering the deep penetration of corruption in daily routines, simplifying employment and entrepreneurship for foreign nationals could make economic sense.

Ukraine is notorious for cumbersome procedures for foreigners either seeking a work visa or as permanent residents, typically through a Ukraine-born spouse, seeking legal employment. Social networking sites maintained by the expats include personal tips on legal loopholes, bribery networks, and lawyer referrals.

For example, a native English speaker with a master’s degree from an accredited public university with experience in higher education tried to get a job teaching English at a college in eastern Ukraine. Obtaining the required documents—translated, notarized, and verified by Ukraine’s Ministry of Education—took six months. The determination: The teacher could speak English, but was not qualified to teach the subject. The school, in dire need of native speakers, denied the individual full employment, but offered temporary, entry-level employment at minimum pay, about $100 a month. Anecdotes about the near impossibility for foreigners of opening a bank account or registering a company are common.

The World Bank Group ranks Ukraine 96th out of 189 countries for ease of doing business.

Talent is needed. In January 2015, Ukraine adopted a resolution on Deregulation of Business Activity, simplifying issuance of work permits for foreign nationals. The resolution also simplified procedures for employment of foreign IT specialists and graduates from leading foreign universities. The resolution is a move in the right direction yet not sufficient for needed transformation of Ukraine’s economy and the fight against corruption.

According to Ukraine’s National Migration Services, at the end of 2014, Ukraine had some 250,000 foreigners permanently residing in Ukraine and more than 75,000 on a temporary stay. These two categories combined make up less than 1 percent of Ukraine’s population. Based on Ukraine’s State Border Guard Service data, during 2010–2013, the number of foreigners entering Ukraine had grown steadily: on average 1.5 percent annually. The number decreased by a staggering 50.8 percent in 2014, coinciding with conflict in Eastern Ukraine.

Industries employing the greatest number of foreigners, from 2010 to 2014, included processing, trade, repair of motor vehicles and household appliances, and construction. Most workers were contracted for short-term work. Foreign professionals in education and finance make up a mere 4 percent. The top three sending countries: Turkey, 18.4 percent; Russia, 17.6 percent; and Poland, 5.8 percent.

Ukraine needs a critical mass of people willing to invest in the economy, changing an old mindset and business culture to promote transparency, rule of law, and open-mindedness. Targeted professions should be expanded beyond IT specialists to include teachers, economists, social workers, and more. Foreign professionals are particularly relevant with Poroshenko’s declaration of 2016 as the year of English language in Ukraine, with knowledge of English to be required for public service positions. To be effective, these initiatives must be accompanied by normative and legal changes in employment procedures.

Resources are few for Ukraine’s government, and efficiency could save money. For example, the Ministry of Education could accept that U.S. university accreditation is rigorous enough for Ukraine; the resolution simplifying the procedure for “leading” foreign universities should be expanded to include accredited institutions. The government should also differentiate among countries for level of scrutiny applied in verification of credentials.

IMF to the Aid of Ukraine: Well-Intended, but Misguided

Ukraine is in dire need of foreign investment, entrepreneurship, and world-class specialists. Inviting foreigners to participate in the country’s political life is not without controversy. The president is making an attempt to put meritocracy above bureaucracy. The next step is to extend the invitation to qualified foreigners in other sectors of Ukraine’s economy and simplify cumbersome procedures. In the list of Ukraine’s popular proverbs, “picking the cream of the crop” may soon replace “picking the lesser of two evils.”

Olena Lennon, Ph.D., is a former Fulbright scholar from Horlivka, Ukraine, teaching foreign policy and conflict resolution at the University of New Haven. Her hometown of Horlivka, located in the Donetsk province of Eastern Ukraine, Donbas, has been one of the main strongholds of Russian-backed separatists in recent months. Copyright © 2015 YaleGlobal and the MacMillan Center. This article was previously published on Yaleglobal.yale.edu