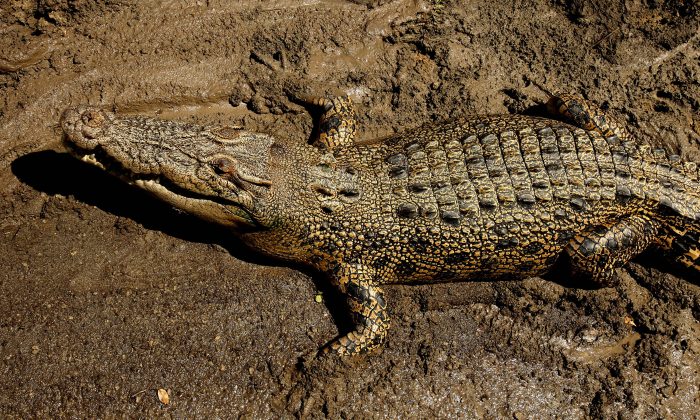 An estuarine crocodile better known as the saltwater or saltie, lies in the sun on the banks of the Adelaide river near Darwin in Australia's Northern Territory on Sept. 2, 2008. (Greg Wood/AFP/Getty Images)
Asia & Pacific

Wanpen Inyai, a 65-year-old Thai woman, jumped into a crocodile pit to commit suicide, according to reports.

The Bangkok Post reported that Wanpen, who was from Bangkok, jumped into the pit in a reptile farm near the capital city.

Family members said Wanpen was depressed and in bad health.

The elderly woman reportedly took off her shoes before she jumped into the middle of a pond, which contains hundreds of adult crocodiles.

Staff attempted to use long stings to prevent the crocodiles from attacking.

The Samut Prakarn Crocodile Farm & Zoo has a website, which claims the facility has about 100,000 crocodiles. It has been open since 1950 and was founded “by the famous Crocodile King, Mr. Utai Youngprapakom. Mr. Utai has been the pioneer not only to preserve the endangered flow of crocodile skins and related also to provide a continuous flow of crocodile skins and related products to the world market (sic).”

“There are more than 100,000 crocodiles together with various kinds of wild animals in this 300 acre edutainment (sic).”

The suicide-by-crocodile incident took place on Friday. Her family filed a missing person report earlier in the day.