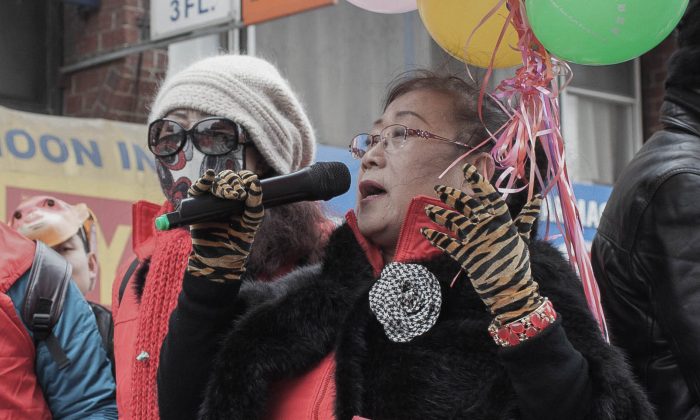 FLUSHING, NY—It was a merry day for the 500,000 Chinese in Queens, New York, celebrating the Chinese New Year with an annual parade through the streets of Flushing.

Yet spectators seemed unsure how to react to one parade entry—the Chinese Anti-Cult World Alliance—a non-profit set up in the United States with the sole purpose of carrying out the Chinese government’s persecution of the peaceful spiritual group Falun Gong overseas.

Falun Gong has been part of the parade for about a decade. With a 100-strong marching band, dancers in traditional costumes, a waist drummers’ contingent, and a multitude of banners and floats, it is the largest and most sophisticated part of the parade.

Falun Gong was introduced in China in early 1990s. Teaching slow-moving exercises, meditation, and the principles of truthfulness, compassion, and tolerance, it spread rapidly. By the end of the 1990s the Chinese regime estimated 70–100 million practiced Falun Gong.

With ever more people picking up Falun Gong, including in the higher echelons of the Chinese Communist Party and even in its military, some top leaders felt a major part of the Party’s mechanism for maintaining power was at risk–control over how the Chinese people think.

In 1999 then-Party leader Jiang Zemin made a speech accusing Falun Gong of “competing with the Party for the masses” and on July 20 launched a large-scale Maoist-style campaign to “eradicate” Falun Gong.

He created an extra-judicial organization, the “610 Office,” responsible for carrying out that campaign through arrests, torture, and brainwashing. Over the years reports accumulated about the regime killing people arrested for practicing Falun Gong and selling their organs.

Meanwhile, another organization was created to wage the “ideological battle,” to convince the Chinese population that the suppression campaign was justified. After the persecution of Falun Gong began, almost overnight Party propaganda suddenly blamed Falun Gong for virtually every thinkable (and unthinkable) vice through press, television, radio, even school textbooks.

Michael Chu, council chairman of the Chinese Anti-Cult World Alliance, has a track record of currying favor with the Chinese Communist Party through questionable activities. Yet participation in the Flushing parade is among the more awkward ones.

One of the alliance’s parade floats was nearly stopped from participating because a banner with a defamatory statement addressed at Falun Gong was found on its side. The parade excludes messaging unrelated to the occasion.

In the end the spectators seemed too preoccupied with the festivities to care, giving empty looks to the Alliance’s entourage donning huge Communist Party flags.

“You know, politics is everywhere,” commented Diana Zhao from Flushing, watching the parade. She said such messages shouldn’t be in the parade, as it’s supposed to focus on the Chinese New Year celebration, but people usually don’t pay it attention.

In fact, the members of the group itself seemed disinterested in its agenda. Four young Chinese girls, some of the few within the group who acknowledged speaking English, responded with prolonged laughs as to why they chose to participate. “Do you want the real reason?” one of the girls finally responded, still laughing. “Because we get free food.”

Indeed, right after the parade most of the Alliance’s contingent stripped off their red vests and huddled around one of their organizers who distributed vouchers for lunch in a nearby restaurant.

Searching for a spokesperson, some of the group members identified a lady who was supposed to speak for them. She was reluctant though, and it took a good deal of persuasion from the other members before she was willing to talk.

She identified herself as Kelly Zhou and said the group is against Falun Gong because Falun Gong in China is against the government.

As to what the claim has to do with Chinese New Year, Zhou said she didn’t know.

People who come from China are surprised to see that, contrary to what their government tells them, Falun Gong is practiced freely elsewhere in the world.