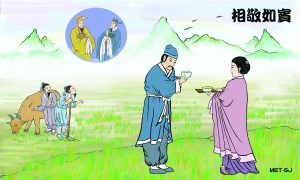 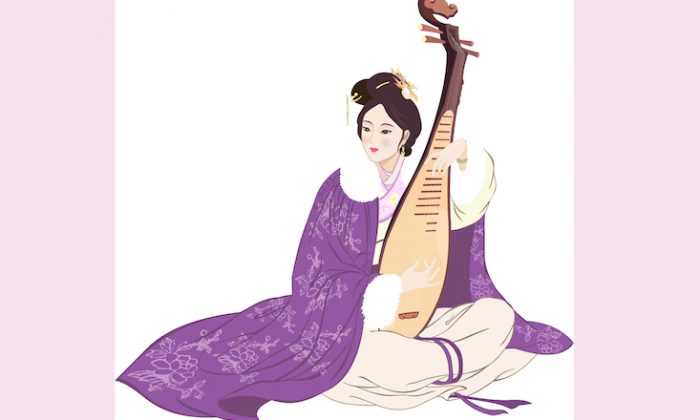 Wang Zhaojun, one of the famous Chinese “Four Beauties,” sacrificed life in her homeland to promote peace between the Han and the Xiongnu peoples. (Yu-Child/Epoch Times)
China

There are ancient Chinese legends about the “Four Great Beauties,” women of such beauty that they were able to influence emperors and kings, and change the course of empires. Though little detail is known about them, they are credited with having had a great impact on Chinese history.

Wang Zhaojun (王昭君) was one of these “Four Beauties.” She was born into a well-educated family at the time of the Western Han Dynasty during the reign of Emperor Yuan and was chosen to be a palace lady-in-waiting when she came of age.

According to an established practice, Emperor Yuan always chose concubines from among the palace ladies based on their portraits. But the royal portrait painter, Mao, would only draw the most beautiful portraits for the ladies that bribed him.

Zhaojun knew the “rule” very well, but was determined not to win the emperor’s attention through this shady means. So, she refused to bribe the painter. Consequently the painter portrayed her as less attractive than she really was.

Like many of the other palace ladies, without good reference through the portrait, she endured years of staying in the palace, like a bird in a cage, with no opportunity of receiving the emperor’s favor.

In 33 B.C., the ruler of the Xiongnu, China’s enemy to the north, visited China’s capital, Chang’an, and asked to forge an alliance with the Han through an arranged royal marriage. Reluctant to honor this king with his only princess, Emperor Yuan decided to choose a palace lady instead.

He told the would-be consorts: “The lady who volunteers to go to the Xiongnu region, I will treat her as a princess.” Since the Xiongnu lived a nomadic life in the far, unknown north, none of the palace ladies wanted to accept his offer— except Wang Zhaojun.

Having seen the unflattering portrait, Emperor Yuan betrothed her to the Xiongnu king. It was not until after the wedding that the emperor saw Zhaojun for the first time.

The emperor was astonished by Wang Zhaojun’s stunning beauty and her elegance and intelligence as well. However, it was too late to keep her for himself. With enormous regret, he let her go to the Xiongnu as promised.

Upon returning to his palace, Emperor Yuan studied the portrait of Zhaojun once again and, in a fury, he had the painter executed for the deceit.

A Sacrifice that Saved Lives

Wang Zhaojun lived with the Xiongnu for the rest of her life and devoted herself to peace between the Xiongnu and the Chinese. She persuaded her husband, the Xiongnu king, to maintain peaceful relations with the Han Empire. In addition, she introduced Chinese culture to the Xiongnu.

After her husband’s death, Wang Zhaojun chose to follow Xiongnu custom by marrying the king’s successor. This was contrary to Chinese Han tradition in which a woman would remain a widow unto death to preserve her chastity. However, she did so in order to maintain the peace and friendship between the two countries.

As an alternative to the common practice of “conquer the world by force and the winner rules,” Emperor Yuan chose a more humane, peaceful, and compassionate way. He arranged royal marriages to resolve conflicts between nations.

This practice spared so many lives that would otherwise have been lost in years of war. Emperor Yuan’s decision and Zhaojun’s sacrifice resulted in 60 years of peace between China and the Xiongnu.

After her death, the Xiongnu built a memorial for Wang Zhaojun. For generations, it was meticulously maintained by the Xiongnu as well as the Han Chinese people, who both revered her.

The legend tells that after death, a woman who possessed both great beauty and virtue would be rewarded in the after-life, especially if she had been wronged or suffered during her life. Her spirit would live on as a deity in charge of a flower.

One of the most famous women in ancient China who met this standard was Wang Zhaojun.

According to this legend, Wang Zhaojun became the deity of the peony after her death.

In Chinese culture, the peony represents elegant beauty, nobility, and prosperity. It is much loved by the Chinese people and is considered the national flower of China.