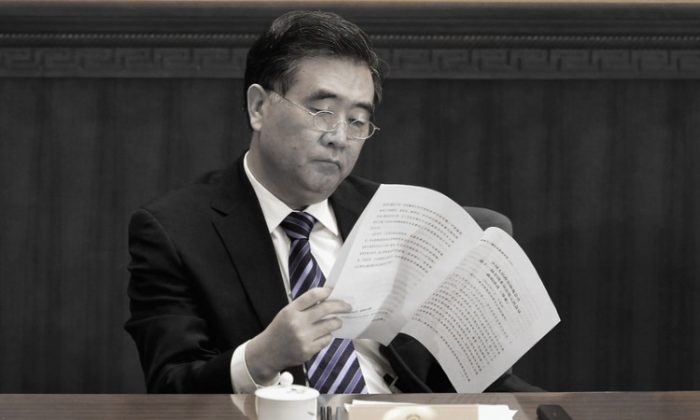 Party Secretary of Guangdong Province Wang Yang, who is known as a liberal in the Chinese communist context, said recently that the Chinese people don't owe their happiness to the Party. (Lintao Zhang/Getty Images)
China

A senior Communist Party official who styles himself as a reformist said in a recent, otherwise staid work report, that the Chinese people should not thank the Party for their happiness. The speech trundled on with formulaic Party jargon, but that remark was rapidly excerpted and widely circulated on the Internet, meeting with the applause of netizens.

Wang Yang is the Party Secretary of Guangdong Province and is expected to be given a seat on the Standing Committee of the Politburo of the Chinese Communist Party (CCP) when the regime convenes its 18th Congress later this year (or possibly early next year, according to reports).

He is known as a “liberal” in the Chinese communist context, and openly jousted with the hard-line neo-Maoist Bo Xilai, who was recently disgraced and stripped of his Party posts. Wang Yang advocates market-oriented public policy and greater economic freedom for Chinese—though he is often careful to say that China should not “imitate” the West.

In a May 9 presentation to the 11th Guangdong Provincial Party Congress, Wang Yang said, “We must do away with the mistaken idea that the happiness of the people is a favor bestowed by the Party and the government.”

This is a contrast to standard Party propaganda, which portrays the CCP as the graceful benefactor of all good things afforded the Chinese people.

Wang Yang added that “Seeking happiness is the right of the people” and that the role of government is to give “the masses of people” (Party jargon) freedom to “boldly explore their own road to happiness.”

The headline news for Chinese web portals was that Wang Yang had said that the people do not owe their happiness to the Communist Party.

The remarks by netizens were highly acclamatory. “A good official is hard to find. Guangdong people are very lucky,” one wrote in the comments section of the article posted to Sohu.com, a major web portal. Another posted, “I just wanted to say I support you, and I am very grateful. I hope your life is peaceful.” Another said “These words will enter history.”

There was a limit to the circulation of the news. State television reports on Wang Yang’s speech did not mention the remarks.

chinareports@epochtimes.com
The Epoch Times publishes in 35 countries and in 19 languages. Subscribe to our e-newsletter.