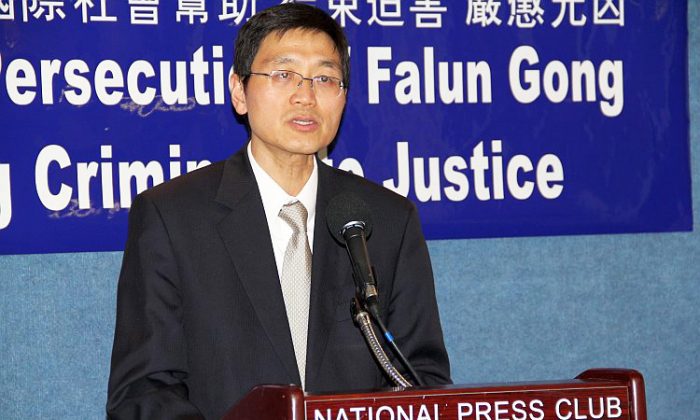 A re-enactment of the communist regime in China harvesting organs from Falun Gong practitioners at a public rally in Tokyo on Sept. 13, 2006. (clearwisdom.net)
China

Wang Lijun, the former police chief and deputy mayor of Chongqing, may have participated in or directed the harvesting of organs from Chinese prisoners of conscience, according to a new report by a human rights organization that investigates the persecution of Falun Gong.

The World Organization to Investigate the Persecution of Falun Gong (WOIPFG) in a report on Feb. 15,  connects Wang Lijun to the harvesting of organs from prisoners—something reported earlier in The Epoch Times—and also links him to the persecution of Falun Gong. And it suggests that these two sets of activities of Wang’s likely converged.

From May 2003 to June 2008 Wang Lijun was the chief and Party Secretary of the Public Security Bureau in Jinzhou City, and from 2004 onwards he was also the Vice-Mayor. He evidently spent some of his time engaged in non-official duties, however.

Wang was also the director of the “On-Site Psychology Research Center” (OSPRC) of the Public Security Bureau of Jinzhou, with which it shared a building.

The first report available on the Chinese Internet about this organization was from 2005, when the Liaoshen Evening News gave an in-depth presentation of the OSPRC in action. The Center had been charged with carrying out an execution of two criminals, which was witnessed by the reporter and a group of experts. The set-up was like a scientific research lab, according to the report.

The “research center,” according to that report (archived), became an execution site where researchers and experts were able to witness “the entire process of executing a death penalty criminal by injection method.'”

In 2006, when Wang received an award for his organ harvesting efforts, he described his “on-site research center” as “the transplant scene, the very spot of anatomization, the very spot of organ transplantation into the organ recipient,” according to an article published on the website of the Dragon Design Foundation. The award Wang was given was presented by the Guanghua Science and Technology Foundation, a non-profit with which the Dragon Design Foundation used to be affiliated, according to staff from the latter. When contacted by telephone, staff at neither organization could explain much more about the award, and only said that it had been discontinued.

WOIPFG claims that, according to its own investigation, Wang also supervised a project titled “Organ Transplantation from Donors Who Have Been Subjected to Drug Injection,” which involved several universities and a military hospital. A photograph is provided of a poster or marketing material, with OSPRC in the title and details about organ transplant from donors given an injection.

In a previous interview with The Epoch Times David Matas, a Canadian human rights lawyer who co-authored a report on organ harvesting from Falun Gong prisoners, said that “It used to be that China would shoot for execution, then they shifted from shooting to using injections. In effect they’re not killing by injection, but paralyzing by injection, and taking the organs out while the body is still alive.”

Wang Lijun’s research may have played a role in precipitating this change. According to a vitae online, he was the project leader for the “Key Research Project of Trauma-Free Anatomy in the Asia-Pacific Region.” This project included researchers from the Institute of Forensic Medicine at University of Bern, Switzerland, Medical University of Graz, Austria, China Medical University, Jinzhou Medical University and the 205 Hospital of the People’s Liberation Army, according to WOIPFG.

Wang became head of the Chongqing Public Security Bureau after his political patron, Bo Xilai, was shunted there in 2008. According to an article in Global Times, an outlet affiliated with Communist Party mouthpiece People’s Daily, in December 2008 Chongqing began gradually eliminating execution by firing squad, and phasing in execution by injection.

“The whole point of drugging in this context is to keep the organ alive while it’s removed, so the organ would be healthier. If they weren’t going to do that they might as well shoot the person,” said David Matas in a previous telephone interview.

“The disadvantage medically is that the drug taints the organ to an extent, but the organ is kept alive. In China there has been a movement to kill by drugs because you get more organs out of that because there’s a longer time in which to harvest,” Matas said. “That’s what they’re talking about.”

Continued on the next page: Doing the Math …