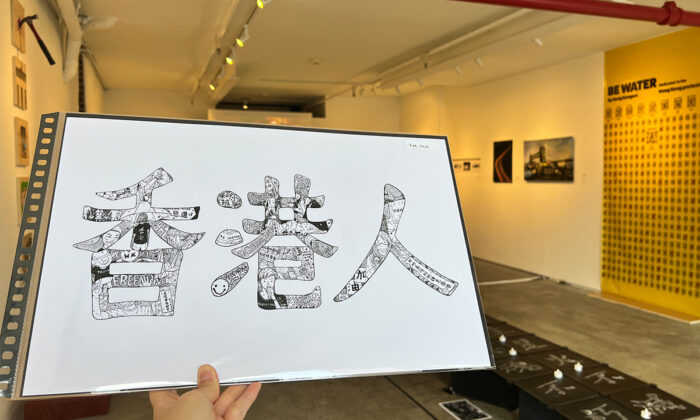 Jessica Mao
Jessica Mao is a writer for The Epoch Times with a focus on China-related topics. She began writing for the Chinese-language edition in 2009.
View profile
Follow
and Teresa Zhang

As the Chinese Communist Party (CCP) intensifies its control over Hong Kong, more and more Hong Kong people are emigrating overseas. On the third anniversary of the anti-Extradition Movement, organizations of Hong Kongers in different countries are holding exhibitions and community activities to mark the occasion. Joseph Lian Yizheng (練乙錚), professor of economics and media personality, hoped that Hong Kong people will learn from the Jewish and maintain their cultural legacy after leaving their homeland.

Wandering Hong Kong, an art exhibition organized by Lion Rock Café (獅山冰室), is being held in Lower Manhattan, New York, featuring dozens of works of art in various forms, including paintings, installations, and videos. They are works of Hong Kongers from the United States, England, Germany, Taiwan and Canada.

Daniel, a member of the Lion Rock Café, told The Epoch Times that the exhibition features Hong Kong people from all over the world sharing their creative works “wandering” around the world. He hoped that dispersed Hong Kong people can reunite in this way. In this free art space, Daniel hoped that they could make their voices heard, record the indelible history of 2019, and express their attachment to Hong Kong and the feeling of restarting in a foreign place.

Daniel also has four photographs of his own in the exhibition (See below). He explained that these four photographs were taken when he returned to Hong Kong recently. Although the Lennon walls had been removed and the words of resistance erased, the memories of Hong Kong people cannot be erased. When he visited the familiar places again, everything was still vivid in his mind.

In 2019, the Hong Kong authorities proposed to amend the Fugitive Offenders Ordinance to extradite Hong Kong people to mainland China, which triggered the Anti-Extradition Movement. Then in 2020, the Chinese Communist Party (CCP) pushed through the National Security Law in Hong Kong and pro-democracy activists were arrested, resulting in a wave of emigration from Hong Kong. More than 100,000 Hong Kong people have emigrated to or gone into exile in other countries. On June 12, the third anniversary of the Movement, various organizations of Hong Kong people around the world hosted exhibitions hoping to pass on the culture and identity of Hong Kong people.

Speaking to the Epoch Times, Lian quoted Hungarian-Jewish writer Paul Tabori as saying that almost all exile movements disappear within a generation. He said that when it comes to passing on culture, “every second counts.” He hopes to learn from the Jewish spirit in recovering their homeland, so that the Hong Kong culture can continue overseas.

Lian continued, “After 2,000 years away from their homeland, Jews can still preserve their own culture and identity through 80 generations of inheritance, and eventually take advantage of the opportunity to achieve their dreams.”

Lian further pointed out, what made the Jews worthy of learning, was their  perseverance in passing on their cultural heritage, on the one hand, and their financial strength to support their efforts on the other. He mentioned that many Hong Kong businessmen who supported the democratic movement have been suppressed by the regime and have exiled overseas. He hoped that the economic system of the democratic movement can continue overseas, maintaining the “yellow economic circle” in the words of the Hong Kong protesters, allowing the Hong Kong democracy movement overseas to maintain its economic independence.

In Melbourne, Australia, the Hong Kong Film Festival opened on June 12 with screenings of films based on the anti-extradition movement, which organizers hope will help preserve Hong Kong culture. In Paris, France, a Hong Kong film festival will open on June 23. LK, an exiled Hong Kong activist who organized the festival, said that Hong Kong emigrants are looking forward to maintaining their identity as Hongkongers, which the Hong Kong government and the CCP are working to eradicate.

In the U.S., NY4HK held an online program “Clubhouse” on June 12, where Alex Chow Yong-kang (周永康), board member of Hong Kong Democracy Council and student leader of the Umbrella Movement spoke. He pointed out that “one country, two systems” had ended in Hong Kong, but the overseas Hong Kong community has not given up their struggle for the Hong Kong of their heart. He believed that Hong Kong people in exile should actively participate in community affairs and build community ties, and that they should research on issues related to Hongkongers, continue to tell the stories of Hongkonger’s identity, values, history, and culture, and promote their own identity.