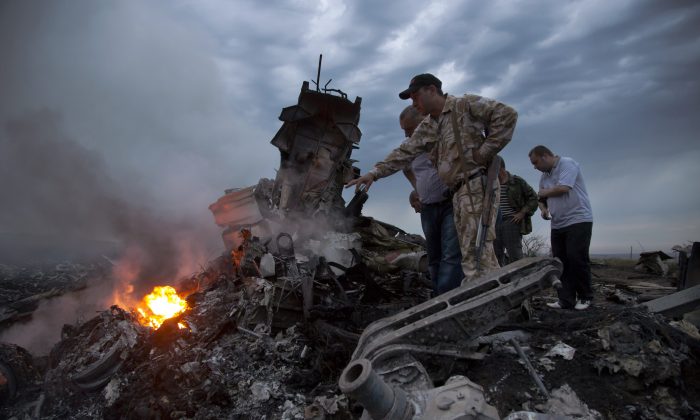 Wan Amran Bin Wan Hussin and Eugene Choo Jin Leong have been named as the pilots on Malaysia Airlines Flight MH17, which was shot down over Ukraine on July 17.

The identities haven’t been officially confirmed but were made public in a posting on Twitter which appears to show the entire list of staff members on board the flight.

All of the crew members were Malaysian.

298 people in total were on board the plane. No survivors have been found as of yet.

Pieces of the plane were strewn over an area of about seven miles, including seats and body parts.

“Malaysia Airlines is in the process of notifying the next-of-kin of the passengers and crew. Our focus now is to work with the emergency responders and authorities and mobilize its full support to provide all possible care to the next-of-kin,” it said in a statement.

“Malaysia Airlines is deploying its ‘Go Team’ to Amsterdam with a group of caregivers and volunteers to assist the family members of the passengers. Our thoughts and prayers are with all affected passengers and crew and their family members.”

The company said that there were 154 Dutch, 43 Malaysian (including 15 crew and 2 infants), 27 Australian, 11 Indonesian (including 1 infant), 9 United Kingdom, 4 Germany, 4 Belgium, 3 Philippines, and 1 Canadian residents on board.

41 passengers nationalities are known. There were reportedly 23 Americans on board.

See an Associated Press update below the photo.

A woman reacts to news regarding a Malaysia Airlines plane that crashed in eastern Ukraine at Kuala Lumpur International Airport in Sepang, Malaysia, Friday, July 18, 2014. Malaysia Airlines said it lost contact with Flight 17 over Ukrainian airspace Thursday. It was flying from Amsterdam to Kuala Lumpur, Malaysia. (AP Photo/Joshua Paul)

In what appears to be a mind-boggling coincidence, Malaysia is reeling from the second tragedy to hit its national airline in less than five months.

On March 8, a Malaysia Airlines jetliner vanished about an hour after taking off from Kuala Lumpur, spawning an international mystery that remains unsolved. On Thursday, the airline — and the nation — were pitched into another crisis after the same type of aircraft was reported shot down over Ukraine.

Ukraine said the plane was brought down by a missile over the violence-wracked eastern part of the country. Other details were only just beginning to emerge.

But what’s certain is that the struggling airline and the nation must now prepare for another agonizing encounter with grief, recriminations, international scrutiny and serious legal and diplomatic implications.

“This is a tragic day in what has already been a tragic year for Malaysia,” Malaysian Prime Minister Najib Razak said.

Amid it all, a question: Just how could disaster strike the airline twice in such a short space of time?

“Either one of these events has an unbelievably low probability,” said John Cox, president and CEO of Safety Operating Systems and a former airline pilot and accident investigator. “To have two in a just a few months of each other is certainly unprecedented.”

The first disaster deeply scarred Malaysia and left the world dumbstruck. How could a Boeing 777-200ER, a modern jumbo jet, simply disappear? Flight 370 had veered off course during a flight to Beijing and is believed to have crashed in the Indian Ocean far off the western Australian coast.

The search area has changed several times, but no sign of the aircraft, or the 239 people aboard, has been found. Until then, how the plane got there is likely to remain a mystery.

On Thursday, there was no mystery over the whereabouts of the Boeing 777-200ER, which went down on a flight from Amsterdam to Kuala Lumpur with 283 passengers and 15 crew members. Its wreckage was found in Ukraine, and there were no survivors.

Officials said the plane was shot down at an altitude of 10,000 meters (33,000 feet.) The region has seen severe fighting between Ukrainian forces and pro-Russia separatists in recent days.

“If it transpires that the plane was indeed shot down, we insist that the perpetrators must swiftly be brought to justice,” Malaysia’s prime minister said.

Malaysia Airlines was widely criticized for the way it handled the Flight 370 hunt and investigation. Some relatives of those on board accused the airline of engaging in a cover-up, and there have been persistent conspiracy theories over the fate of the plane, including that it might have been shot down.

There was no immediate reason to think the two disasters to befall the airline were in any way linked.

Najib said the plane’s flight route had been declared safe by the global civil aviation body. And Cox said that to his knowledge, there was no prohibition against flying over eastern Ukraine despite the fighting on the ground.

Charles Oman, a lecturer at the department of aeronautics and astronautics at the Massachusetts Institute of Technology, said it was too early to draw conclusions.

“Given the military conflict in the region, one has to be concerned that identities could have been mistaken,” he said in an email.

Malaysia Airlines was especially criticized for the way it handled the communications around the missing jetliner, which presented unique challenges because of the uncertainty facing the relatives of those on board. With the plane crashing Thursday over land and its wreckage already located, there will be no such uncertainty.

But the investigation will be just as sensitive. There will be legal and diplomatic implications depending on who was responsible.

“The airline and the Malaysian transport ministry took a lot of hits for the way they handled MH370, due to their inexperience,” Oman said. “Hopefully they will do better this time.”

The accident will surely inflict more financial damage on Malaysia Airlines. Even before the March disaster, it reported a loss of $370 million in 2013 when most of the word’s other airlines were posting an average profit of 4.7 percent. After the Flight 370 disaster, passengers canceled flights, and even though the airline is insured, it faces uncertainty over payouts to the victims’ families.

“They were in worse shape than any other airline in the world before even the first incident,” said Seth Kaplan, managing partner of industry newsletter Airline Weekly. “There’s little precedent for an airline going through what they have gone through let alone surviving it.”