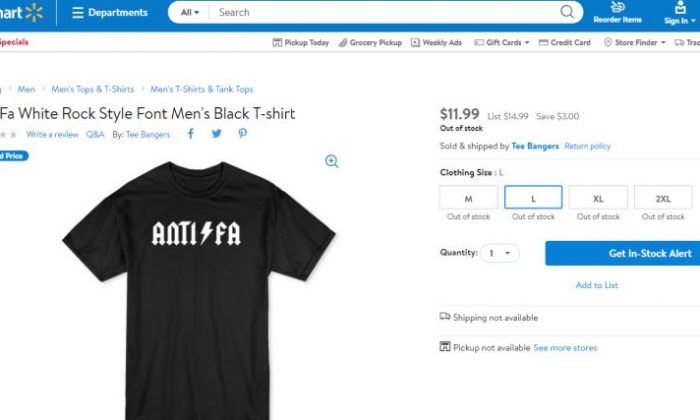 Walmart is under fire for selling T-shirts that promote the far-left extremist group Antifa over the weekend after users noticed that the chain was selling it.

On the company’s website, it had several shirts that said “Antifa” listed on the website. One, produced by Tee Bangers, is selling for $11.99.

According to Breitbart, several pieces of Antifa clothing appeared to no longer available for sale on the retailer’s website. But as of Sunday, at least one was listed on the website. A book, “Antifa: The Anti-Fascist Handbook,” was also apparently taken down.

“This ‘We Are Anti Fa’ white AC/DC style font T-shirt will express yourself inside the opposition to the ideology, organizations, governments and people from the far right (fascism). Just remember to keep creating a better world (sic),” the product’s description reads, adding that it’s “Made in Mexico.”

A search on Walmart’s website of “Antifa” turned up no results on Sunday.

More than a dozen shirts were still listed on the website, according to IJR, and some read, “Antifa forever,” “proud to be Antifa,” and “we are Antifa.”

FBI Director Christopher Wray told a House panel this week that the agency is investigating people inspired by “kind of an Antifa ideology,” Fox News reported.

“While we’re not investigating Antifa as Antifa—that’s an ideology and we don’t investigate ideologies—we are investigating a number of what we would call anarchist-extremist investigations, where we have properly predicated subjects of people who are motivated to commit violent criminal activity on kind of an Antifa ideology,” he told the panel.

Antifa was listed as a “domestic terrorist organization” in the state of New Jersey.

Walmart came under fire last week for selling a shirt with the slogan, “Rope. Tree. Journalist. Some Assembly Required.” It was later removed, according to several media reports.

“This item was sold by a third-party seller on our marketplace and clearly violates our policy,” a Walmart statement said, according to CBS News. “We removed it as soon as it was brought to our attention, and are conducting a thorough review of the seller’s assortment.” Walmart reportedly removed the shirt five hours after the complaint was made, according to the Radio Television Digital News Association (RTDNA), which made the complaint.

“We are grateful for Walmart’s swift action,” said RTDNA Executive Director Dan Shelley. He added they’re “dismayed that it, and anyone else selling the shirt, would offer such an offensive and inflammatory product.”