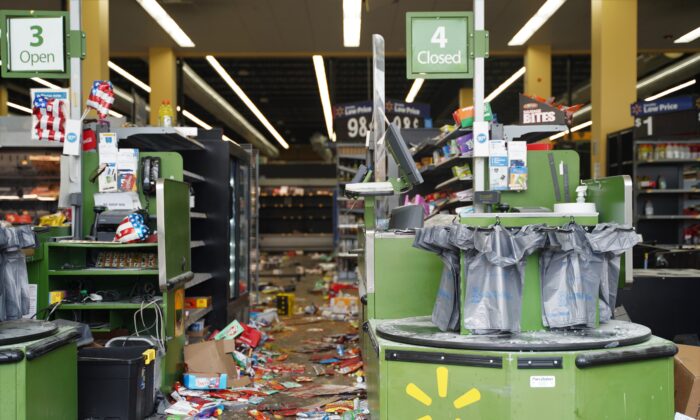 A Walmart that had been looted by protesters, is seen in the Chicago neighborhood of Bronzeville, on June 1, 2020. (Cara Ding/The Epoch Times)
US News

Walmart Says It Will Lock up Guns, Ammunition at Some Stores

Walmart, one of the largest gun retailers in the United States, confirmed that it will remove firearms and ammunition from sales floors as nationwide protests continue over the death of George Floyd.

“We have temporarily removed firearms and ammunition from the sales floor in some stores out of an abundance of caution,” the nation’s largest retailer wrote in a statement Wednesday. “Those items are available for purchase, but are being stored in a secure room.”

Walmart, which operates 4,700 stores in the country, didn’t say how many stores would be affected by the new policy. The company doesn’t sell firearms in a number of major urban markets due to looting and riots sparked by Floyd’s death.

Walmart, Target, CVS, and Apple temporarily closed or limited hours at a number of locations for safety reasons after they were looted or vandalized.

The Benton, Arkansas-based chain stopped selling handgun and certain types of rifle ammunition, while requesting that people not openly carry firearms in stores. It also ended the sale of handguns in Alaska.

In major cities, thousands of people have gathered to protest Floyd’s death after video footage showed him struggling to breathe as a Minneapolis police officer pinned him on the ground with his knee on his neck. In a number of cases, the protests have turned violent, with rioters vandalizing stores and small businesses, looting, arson, and shootings.

On Sunday, President Donald Trump said the United States would declare the far-left militant group Antifa a terrorist organization in the wake of the riots.

Many mayors have imposed citywide curfews, which in some cases, have been flaunted by demonstrators. In New York, high-end retailers such as Chanel, Coach, and Sephora were looted with windows smashed.