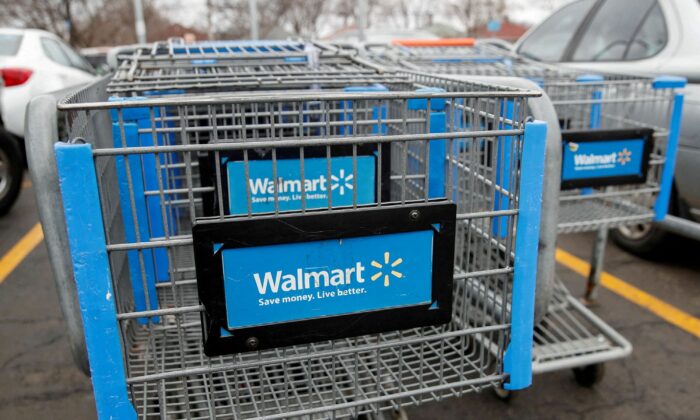 Walmart shopping carts on the parking lot ahead of the Thanksgiving holiday in Chicago, on Nov. 27, 2019. (Kamil Krzaczynski/Reuters)
US News

Retailer Walmart has reportedly pulled Chaokoh coconut milk from its shelves following undercover investigations that allegedly revealed the use of forced monkey labor.

The People for Ethical Treatment of Animals (PETA) confirmed the news in a statement on June 7, stating that Walmart had removed the coconut milk from the Thai-based major producer after it had received over 86,000 emails from PETA supporters.

As of June 8, the only Chaokoh product available to purchase on Walmart’s website is a can of Banana Blossom in brine.

The Epoch Times has contacted Walmart and Chaokoh for comment.

“The coconut trade uses social monkeys as chained-up coconut-picking machines, depriving them of any opportunity to eat, play, or spend time with their families,” PETA Executive Vice President Tracy Reiman said in a statement. “With one PETA exposé after another confirming cruelty on coconut farms, retailers are dropping Chaokoh left and right. Kudos to Walmart for its kind decision.”

PETA Asia said it conducted two undercover investigations in 2019 and 2020 in farms and monkey-training facilities and found that monkeys were forced to pick coconuts for Chaokoh coconut milk.

The organization said it had documented abuse and exploitation and noted that many monkeys were being illegally abducted from their families when they are just babies and made to wear metal collars and chained up for long periods of time.

“Denied the freedom to move around, socialize with others, or do anything else that is important to them, these intelligent animals slowly lose their minds,” PETA said. “Driven to desperation, they pace and circle endlessly on the barren, trash-strewn patches of dirt where they’re chained.”

“The terrified young monkeys are forced to perform frustrating and difficult tasks, such as twisting heavy coconuts until they fall off the trees from a great height. An investigator learned that if monkeys try to defend themselves, their canine teeth may be pulled.”

The Epoch Times could not verify whether the monkeys in the PETA video were being forced to harvest coconuts.

In 2020, a “monkey-free due diligence assessment” was conducted by Bureau Veritas Certification (Thailand) Ltd., contracted by Theppadungporn Coconut Co., in which investigators randomly visited 64 of its 817 farms and found no monkeys were being used to farm coconuts.

PETA said that both Chaokoh and the Thai government have “failed to take meaningful action to end the use of forced monkey labor” despite being informed of the situation nearly a year ago and were relying on a “misleading and inadequate audit system” instead of visiting the farms to assess the situation.

Walmart is the latest of 45,000 stores to have cut ties with Chaokoh coconut milk, PETA said, including Wegmans, Costco, Food Lion, Stop & Shop, and Target.

The organization said they are still pushing for other retailers to pull Chaokoh coconut milk from their shelves, including 99 Ranch Market.

Back in 2020, Thai Commerce Minister Jurin Laksanawisit told reporters that the use of monkeys in the coconut industry is “almost non-existent” and that this had long ago been replaced by human labor.

“But there may still be the pictures of monkeys collecting coconuts for tourism on video clips, which created a misunderstanding,” Jurin said.