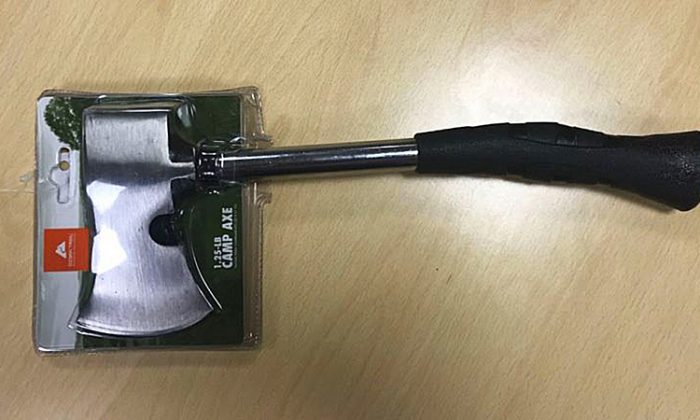 Walmart is recalling 246,000 of these Ozark Trail brand camp axes because the heads can fly off. (US Consumer Product Safety Commission)
US News

Retail giant Walmart has announced a recall of almost a quarter-million possibly dangerous camp axes that have been on sale since the start of 2017.

The cause for the recall is that the axes are a potential health hazard. According to the U.S. Consumer Product Safety Commission (CPSU), at least two customers have reported that while using the axe, the axe-head separated from the tubular steel shaft and flew off, causing injury.

The CPSU report mentions only two injuries, described as “in minor cuts and abrasions.”

It is possible that other users have been injured. InvestorPlace reported “multiple injuries” and says it is unclear how many injuries were actually caused by the axe’s faulty design and construction.

The CPSU recommends that people who have bought these axes stop using them immediately and return them to Walmart at their earliest convenience. Walmart will give buyers a full refund, according to InvestorPlace.

The axes in question are marked “Ozark Trail” and model number 60111140 on the packaging. The axes are about 14 inches long, and weigh about 1.25 pounds. The shaft is a polished steel tube and the head is less brightly polished. The axe comes with a non-slip rubber handle.

The axes were produced by a company named Gardex, located in India.

InvestorPlace reported that Walmart stock dipped a fraction of a percentage point when the news was announced.