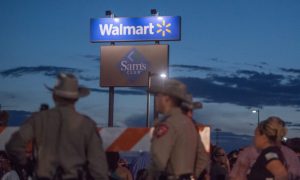 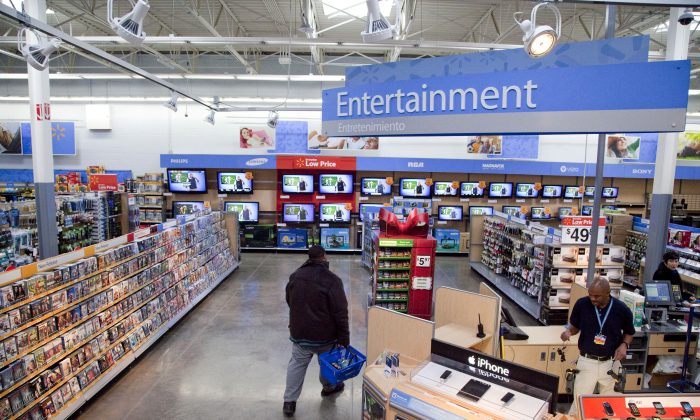 A view of the entertainment section of a Wal-Mart store is seen in Alexandria, Va., on Dec. 15, 2010. (AP Photo)
Companies

Walmart is removing from its stores nationwide signs, displays or videos that depict violence following a mass shooting at one of its stores in Texas, though it has not changed its policy on gun sales.

The retailer instructed employees in an internal memo to remove any marketing material, turn off or unplug video game consoles that show violent games—specifically Xbox and PlayStation consoles, and to monitor and turn off any violence depicted on screens in its electronics departments.

Employees were also ordered to turn off hunting season videos in the sporting goods department where guns are sold.

Under the heading: “Immediate Action,” employees were instructed to “Review your store for any signing or displays that contain violent images or aggressive behavior. Remove from the salesfloor or turn off these items immediately.”

“We’ve taken this action out of respect for the incidents of the past week,” said spokeswoman Tara House in an email to The Associated Press on Aug. 9.

The company’s policy on sales of video games that depict violence has not changed, nor has its policy on gun sales.

Following the mass shooting at Marjory Stoneman Douglas High School in Parkland, Florida, Walmart Inc. banned sales of firearms and ammunition to people younger than 21. It had stopped selling AR-15s and other semi-automatic weapons in 2015, citing weak sales.

The killings in Texas, was followed by another in Dayton, Ohio, just hours later that left nine dead.

On Thursday, five days after the El Paso shooting, panicked shoppers fled a Walmart in Springfield, Missouri, after a man carrying a rifle and wearing body armor walked around the store before being stopped by an off-duty firefighter.

No shots were fired and the man was arrested after surrendering.

A backfiring motorcycle in New York’s Times Square set off a stampede Tuesday. Video footage showed the throngs rushing out of the busy tourism and entertainment area, some taking cover behind vehicles and in doorways.

A motorcycle backfiring in New York’s Times Square on Tuesday night caused panic after the sound was mistaken for gunshots.

NYPD Midtown North later confirmed that there was no shooter and the area was safe.

This comes in the wake of two deadly mass shootings in the US. pic.twitter.com/tK9GZMYjeD

The New York Police Department took to social media saying, “There is no #ActiveShooter in #TimesSquare. Motorcycles backfiring while passing through sounded like gun shots.”

There is no #ActiveShooter in #TimesSquare. Motorcycles backfiring while passing through sounded like gun shots.