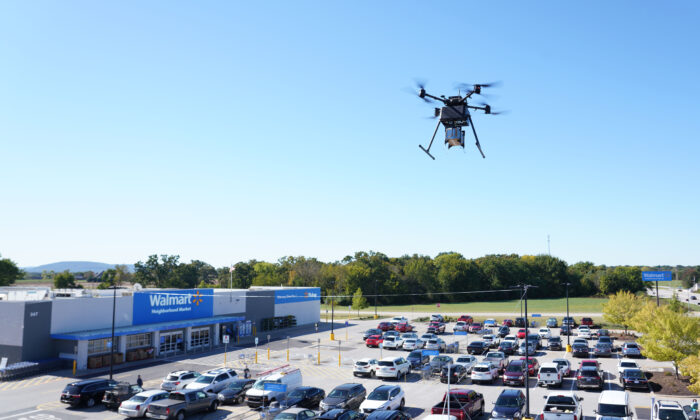 Walmart stores around Orlando and Tampa will soon be using drone service. May 2022 (Courtesy, Walmart Corporate)
US

PUNTA GORDA, Fla.–Walmart will expand its “DroneUp” delivery network to 34 sites in six states, including Orlando and Tampa in Florida, by the end of 2022, the company announced on May 25.

“We continue to expand our delivery operations to help customers get the items they need when they need them,” he said.

Walmart has not said which stores in those areas would add the service, but said they expect to be able to send approximately one-million packages per year by using the drone system.

The drones allow shoppers to order a maximum of 10 pounds of items between the hours of 8 a.m. and 8 p.m. Packages can be delivered by drone in as little as 30 minutes, according to the release.  A delivery fee of $3.99 will be charged per 10-pound order.

Guggina went on to say that the selected stores will have “hubs” using certified pilots who will follow FAA guidelines. Orders will be filled in the store, attached to the drone, and lowered into customers’ yards via cable.

Walmart had originally thought customers would utilize the service for emergency purchases but has found that customers are also using it as a “convenience.”

“After completing hundreds of deliveries within a matter of months across our existing DroneUp hubs, we’ve seen firsthand how drones can offer customers a practical solution for getting certain items, fast,” the release said.

This isn’t Walmart’s first foray into using new technology in Orlando. Walmart introduced autonomous shelf scanners to accurately check inventory and then pulled them in 2020 during the pandemic.

According to the release, Walmart has plans to use drones to aid other businesses and city governments by using aerial photography to monitor construction progress.

“Not only will the added revenue help offset the cost of delivery, but it also serves the entire drone industry by gathering more flight data as we work together to expand drone operations in a safe and regulated way,” the release said.