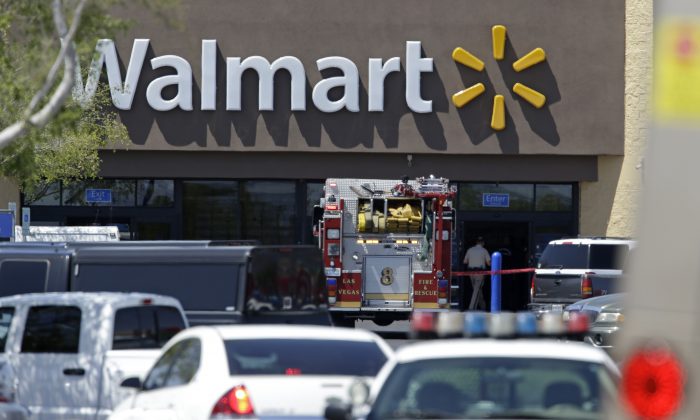 Police and firefighters appear on the scene of a shooting at a Walmart, Sunday, June 8, 2014 in Las Vegas. Police say two suspects shot two officers at a Las Vegas pizza parlor before fatally shooting a person and turning the guns on themselves at a nearby Walmart. (AP Photo/John Locher)
Social Media

An article saying Walmart won’t accept EBT or food stamps is a hoax.

The fake report was posted on the SundayTimesDaily, which posts fake news stories.

“Due to an overwhelming use of fake EBT transactions, Walmart will no longer accept E.B.T. also known as food stamps. Walmart CEO Michael McDonell said that after further consideration Walmart nor Sams Club will accept E.B.T. Food Lion and Harris Teeter said they both are considering the idea as well,” the fake story says.

However, when one clicks on the story they’re taken to a page that says, “We are sorry, but your were tricked! It was just a joke!!!” and has a photo of Leonardo DiCaprio holding up a drink.

“Many readers had previously been fooled by similar pranks posted on the same site involving the supposed ending of coupon redemption in the U.S. and the raising of the minimum legal drinking age to 25,” reads a post from hoax-debunking site Snopes.com.

It adds: “This hoax was promulgated by a phony CNN News lookalike article posted on Sunday Times Daily, a web site that allows users to ‘create your own fake news and trick your friends by sharing it on Facebook, Twitter or any other social network.'”

THE ASSOCIATED PRESS ENTERTAINMENT update: ‘The Situation’ charged in fight at tanning salon

“Jersey Shore” star Mike “The Situation” Sorrentino has been arrested after a fight at a tanning salon.

Middletown Township police Det. Lt. Stephen Dollinger says officers responded to the Boca tanning salon at around 2:10 p.m. Tuesday on a report of a fight in progress. Dollinger says he doesn’t have details on what sparked the fight or on who else was involved.

Sorrentino was charged with simple assault. He posted $500 bail and was released. A court date on the matter has not been scheduled.

Messages left for Sorrentino’s publicist and for a California attorney who has previously represented him weren’t immediately returned.

The cast members of the MTV show were known for their love of tanning and the motto “GTL,” which stood for “gym, tan, laundry.”