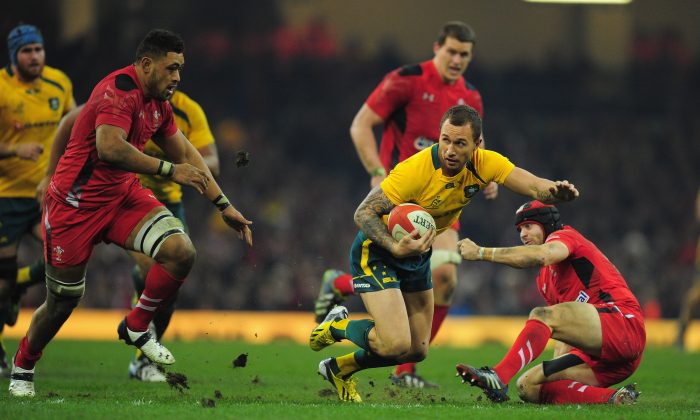 Quade Cooper of the Australia Wallabies spots a gap and leaves Leigh Halfpenny of Wales grasping at thin air during their match at Millennium Stadium in Cardiff on Nov 30, 2013. (Stu Forster/Getty Images)
International

Wallabies and Springboks Snap at All Blacks Heels

By beating Wales 30-26, Australia ensured that the three southern hemisphere rugby giants completed their northern tours with only one loss between them, while finishing the year ranked one, two and three in the world.

New Zealand lead, followed by South Africa then Australia – both of whom have improved as relatively new coaches stamp their mark.

All Blacks Reign, ’Boks Transparent
The All Blacks were the first professional-era team to complete a year unbeaten. Some facts speak for themselves.

For example:
• When New Zealand All Blacks superstar captain Ritchie McCaw was given a 6-month holiday, Kieran Read led the side in his own way, but to same effect. Ongoing victory.
• When All Blacks superstar fly-half Dan Carter was injured, Aaron Cruden stepped up, in his own way, etc. His understudy Beauden Barrett, produced game-influencing plays when he subbed on.
• Young All Blacks players like winger Julian Savea and lock Brodie Retalick have become established Test players.
• South Africa Springboks, too, were unbeaten in November. If the All Blacks are the innovators, the Springboks are the traditionalists.
• ’Bok Coach Heyneke Meyer earned criticism for his old-style, might-is-right approach. But success has brought respect.

While the All Blacks dazzle with sniper-like brilliance, the Springboks dominate with trench warfare.

“I could write down our game-plan and give it to you … it wouldn’t bother me,” he said. “I don’t think the way we play is any secret.”

Despite their forward focus, the Springboks have lethal backs, led by captain Jean de Villiers, who stood out amid an array of great centres through the November Tests.

Young flanker Willie le Roux heads a powerful back row, that includes Francois Louw. With the great Schalk Burger to return from injury, the Springboks loose forwards could dominate.

This strength will be the major weapon the ’Boks will use against the only team to beat them this year, the All Blacks.

Wallabies Confident
The Wallabies, with good reason, are confident for the first time in years. The New Zealanders, who have a fierce rivalry with Australia, won’t like that.

Ewen McKenzie was made Australian coach this year after the Wallabies lost a series to the British and Irish Lions.

Conjecture continues over the sacking of former coach Robbie Deans and the appointment of McKenzie.

As with Meyer, success has brought acceptance for McKenzie, who took the job promising a return to traditional Australian running rugby. McKenzie, too, has successfully returned to tradition, despite many doubters and critics.

McKenzie was a Test prop when Australia’s exciting back play drew crowds around the world. Tradition aside, the All Blacks score about four tries a match, so McKenzie knows tries are required.

McKenzie’s reign began in this year’s Rugby Championship and was draped in failure. Now his Wallabies look good, and are improving.

Cooper’s Redemption Complete
He brought fly-half Quade Cooper back into the squad; Cooper was sacked by former coach Deans. The controversial fly-half, stumbled at first. The brilliance was there, but so were the frailties.

Now, having been made vice-captain, he stands alone as the greatest fly-half in the world—accepting that All Black fly-half Dan Carter is injured. His redemption is a huge credit to Cooper and to his mentor McKenzie.

Under the former coach, Cooper was unmanageable; under McKenzie he is a star. He now defends in the front-line – he used to be protected. His brilliance in now matched by an ability to manage a game.

He was Man of the Match in the Wallabies victory over Wales 30-26 on Saturday. Cooper is still improving and could become the most valuable player in the world.

Rookie cross-code Test star Israel Folau is adding his brilliance to Cooper’s, though they are only developing a combination.

Rugby Championship 2014
So, the All Blacks, who were rattled in the UK, are defending their crown, with increasing success and increasing reason for doubt.

The Springboks have gone back to the forward pack. The Wallabies, back to the backs. Both successfully – and both having room for improvement.

The competition between the trio begins in Sydney on Aug 16 next year, when the Rugby Championship begins, with the All Blacks up against the Wallabies. The first Test of next year may well be The Test of the Year.

But before the Wallabies or the ’Boks get their chance against the All Blacks in the RC next year, England will tour NZ in June.