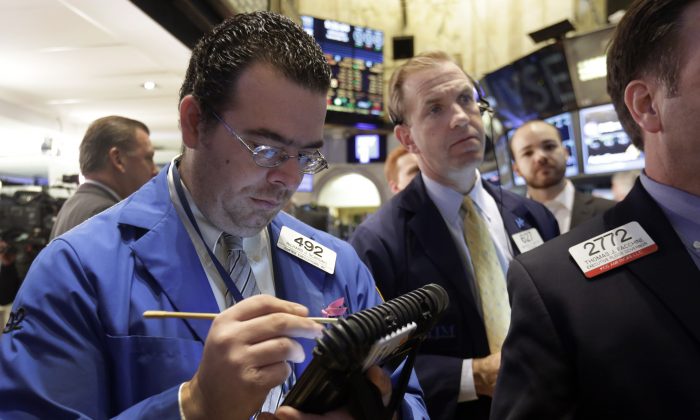 NEW YORK—U.S. stocks were little changed on Wednesday, keeping the major indexes near record levels, as investors assessed the latest reports on the economy.

MIXED PICTURE: Investors got three got reports Wednesday morning that gave mixed signals on how the U.S. economy was doing. Orders for long-lasting manufactured goods rose in October, but a key category that tracks business investment plans declined sharply for a second straight month.

A separate report showed that the number of people seeking U.S. unemployment benefits jumped last week, pushing total applications above 300,000 for the first time in nearly three months. Another report showed U.S. consumers spent modestly more in October, a slight improvement after no gain at all in the previous month.

THE CHIPS RISE: Analog Devices, a maker of semiconductors, was among the biggest gainers in the S&P 500 index after the company reported earnings and sales that exceeded Wall Street’s expectations. The company said that its sales rose 20 percent in its fiscal fourth quarter ending Nov. 1 compared with a year ago. The company also expects 21 percent revenue growth in its first quarter. The company’s stock jumped $2.90, or 5.6 percent, to $54.61.

HOLIDAY SEASON: The U.S. stock market will be closed on Thursday for the Thanksgiving holiday. It will also close early, at 1:00 p.m. Eastern time, on Friday. Stocks have barely budged this week ahead of the break. The S&P 500 index has gained 0.3 percent since Monday and the Dow is flat.

THE QUOTE: “This seems to be a classic holiday plateau,” said Kristina Hooper, head of US Capital Markets Research & Strategy for Allianz Global Investors. “Probably, we are not going to get any focus until we come back on Monday.”

DOWN ON THE FARM: Deere’s fourth-quarter results were stronger than Wall Street expected, but the company said its farm equipment sales and profits will keep falling in its new fiscal year as the sector remains weak. Deere’s stock slid 85 cents, or 1 percent, to $86.94.

ENERGY: Oil prices were flat ahead of a meeting of OPEC members in Vienna on Thursday. Benchmark crude edged down 19 cents to $73.90 a barrel on the New York Mercantile Exchange. It dropped $1.69 to $74.09 a barrel on Tuesday.