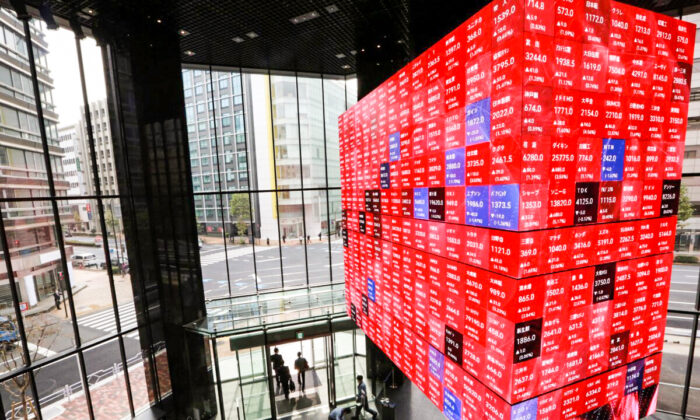 People walk below an electronic stock board at a conference hall in Tokyo, Japan on Nov. 1, 2021. (Koji Sasahara/AP Photo)
Markets

Stocks advanced in Asia on Monday, with Tokyo’s benchmark up 2.2 percent after the ruling Liberal Democrats won a stronger than expected majority in an election Sunday.

Shares rose in all regional markets except Hong Kong.

“This removes a key political overhang that has been weighing on market sentiments … and drives risk-on moves in the Japanese market,” Jun Rong Yeap of IG said in a commentary.

Kishida is expected to draw up a package of government spending and other measures to boost growth. He has backed away from earlier comments suggesting he favors raising the capital gains tax, a move that would largely tax the wealthy. Suggesting that might be one way to address growing inequality in Japan wilted share prices just after he took office.

Shares have since rebounded amid signs Kishida’s administration will likely continue the market-supporting policies of his predecessors Shinzo Abe and Yoshihide Suga.

Hong Kong’s Hang Seng dropped 1.2 percent to 25,084.11 as investor concerns over financial risks for property developers added to worries over the economic outlook.

A wide range of companies, most recently Apple and Amazon, have flagged challenges due to rising costs or supply chain problems.

The latest data from the Commerce Department showed American consumer spending grew just 0.6 percent in September, a cautionary sign for an economy that remains in the grip of a pandemic and a prolonged bout of high inflation.

Outside of earnings, investors were looking ahead to this week’s meeting of the Federal Reserve as the central bank moves closer to trimming bond purchases that have helped keep interest rates low.

Brent crude, the basis for international pricing, lost 31 cents to $83.41 per barrel.