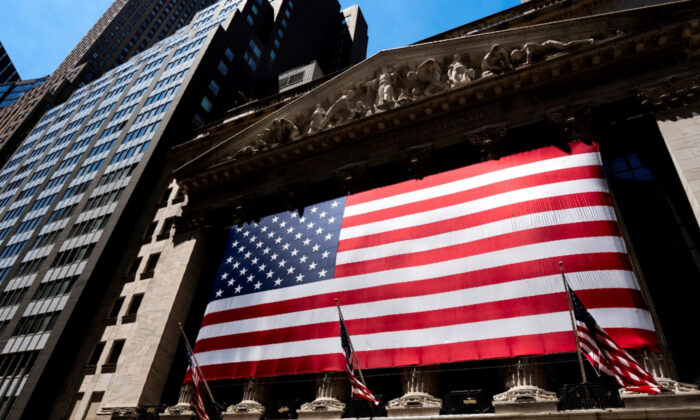 NEW YORK—Stocks rallied Thursday as the countdown clicked closer to zero for a highly anticipated speech about interest rates.

The S&P 500 gained 58.35, or 1.4 percent, to 4,199.12 for its best day in nearly two weeks. Much of the lift came late in the day as traders made moves ahead of Friday morning’s speech by Federal Reserve Chair Jerome Powell, which has long been circled on Wall Street’s calendar.

Treasury yields eased to let off some of the pressure on Wall Street following the release of several reports on the economy. Fewer workers applied for jobless claims last week than expected, an encouraging sign for a jobs market that has been the main pillar for an economy struggling under high inflation.

A revised reading on the overall economy, meanwhile, suggested that its contraction during the spring wasn’t quite as bad as earlier thought. It shrank 0.6 percent on an annualized basis, according to the government’s second preliminary reading, milder than the 0.9 percent given in its initial estimate.

That helped stocks that tend to benefit the most from lower interest rates, such as internet and technology companies. Businesses whose profits closely track the strength of the economy, such as producers of raw materials, also helped to lead the market.

Several retailers have cut their outlooks recently, even after reporting stronger profit for the latest quarter than expected. They’re struggling with swelling inventories and higher costs, while their customers likewise get squeezed by inflation, particularly lower-income ones.

Wall Street’s focus, though, remains on Jackson Hole, Wyoming, where economists from around the world are gathering for an annual symposium.

It’s been the setting for market-defining announcements by the Federal Reserve in past years, and investors are hoping Powell will offer some clarity about where interest rates are heading.

The Fed has already raised rates four times this year in its efforts to halt high inflation, with most of them bigger than the usual hike, and investors want to hear how it’s leaning for future increases. Powell will begin speaking at 10 a.m. Eastern time Friday, a half hour after trading begins on Wall Street.

Besides what the Fed will do with its key overnight interest rate, Powell may also talk about how the central bank is putting into reverse the “ money printer ” it used during the pandemic to goose the economy.

Stocks had jumped through the summer on hopes the Fed may go easier on rate hikes than feared, because investors were seeing signs the nation’s high inflation may be peaking. The hope was that the Fed could downshift the size of its rate increases sooner than expected and may not ultimately raise them as far as earlier thought.

But recent comments from a spate of Fed officials have pushed back on that narrative, leading to the hopes for more clarity from Powell on Friday.

Expectations have built among some investors for Powell to sound “hawkish,” which is Wall Street’s euphemism for a bias toward raising rates aggressively. But some investors at the same time are speculating the Fed could turn around quickly and actually begin cutting interest rates in 2023 given mounting pressures on the economy.

“The market is looking for a consistent policy,” Andy Sparks, head of portfolio management research at MSCI, said in a statement. “Raising rates and then allowing the market to believe it may soon begin lowering rates could undermine Fed credibility with market participants.”

Higher interest rates slow the economy in hopes of undercutting inflation. But they also risk choking off the economy if done too aggressively, and they pull down on prices for all kinds of investments.