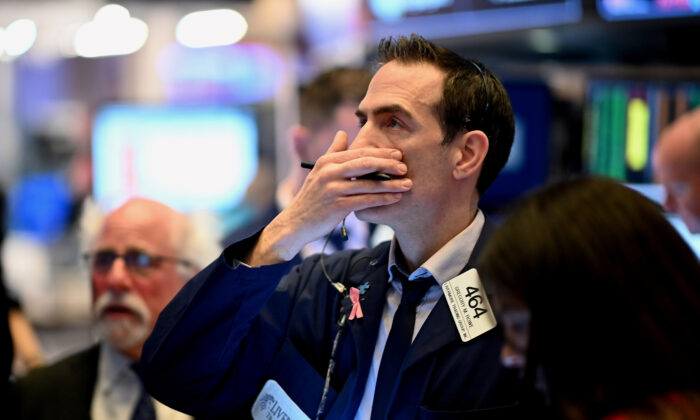 Traders work during the opening bell at the New York Stock Exchange (NYSE) at Wall Street in New York on March 16, 2020. (Johannes Eisele/AFP via Getty Images)
By Tom Ozimek

Wall Street’s main indexes tumbled at the opening bell on Sept. 20, as concerns about the pace of economic recovery, mixed with fears about financial contagion from China’s Evergrande troubles, put selling pressure on risk assets.

While the Dow fell more than 970 points at its low point, the market recovered slightly before the closing bell. The Dow finished down 1.8 percent, or 614 points. The S&P 500, the broadest measure of Wall Street, closed down 1.7 percent, while the Nasdaq Composite fell 2.2 percent. Meanwhile, the VIX added 4.9 points, or 23.6 percent for the day.

The market gyrations come amid concerns over the spillover risk to the global economy from Chinese property group Evergrande’s troubles and as investors look to the Federal Reserve’s policy meeting this week for clues about the central bank’s much-anticipated tapering of stimulus efforts.

Shares of Evergrande have fallen by more than 80 percent in 2021, as it struggles with crippling debt, adding to growing concerns about the health of China’s economy after Beijing’s recent crackdown on tech firms.

“China’s second-largest developer has been facing a liquidity crisis, as its onshore bond trading has been suspended. Without access to funding, Evergrande will find it impossible to pay suppliers, finish projects, or raise income, making default more likely—an eventuality which could send ripples through the entire Chinese economy,” economist Antonio Graceffo wrote in an analysis for The Epoch Times. “A complete collapse of Evergrande could cause widespread economic turmoil and even civil unrest.”

Meanwhile, the Fed is expected to lay the groundwork for reducing the pace of its bond-buying program at the Federal Open Market Committee (FOMC) meeting on Sept. 21 and 22, though economists generally don’t expect any announcements until subsequent meetings later in 2021.

“Soft economic data and a less-than-expected increase in consumer prices give the Fed the ability to defer any announcement on tapering asset purchases. Expect them to kick that can down the road to the November meeting, allowing them to see another round of monthly economic releases to better gauge the strength of the economic rebound in the face of an ongoing pandemic,” Bankrate Chief Financial Analyst Greg McBride told The Epoch Times in an emailed statement.

Since roughly the onset of the pandemic crisis, the Fed has been buying around $120 billion per month of Treasury and mortgage securities, helping to buoy markets but also contributing to inflationary pressures.

Consumer inflation stood at 5.3 percent in the 12 months through August, 0.1 percentage point lower than the July and June figure, which was the highest 12-month spike since 2008, according to the most recent consumer price index report from the U.S. Department of Labor. At the same time, the over-the-month pace of inflation ticked down to 0.3 percent in August from 0.5 percent in July and 0.9 percent in June, suggesting that peak inflation may have passed.

Worries about inflation have driven down consumer buying attitudes for household durables to around a 40-year low, according to the most recent University of Michigan consumer sentiment survey.

“The decline in assessments of buying conditions for homes, vehicles, and household durables left all three near all-time record lows,” Richard Curtin, the survey director, said in a statement, noting that the drops were “due to spontaneous references to high prices.”

Inflation has emerged as a key concern amid the economic recovery, rising faster than wages and eroding Americans’ buying power. While Federal Reserve officials have maintained that inflation is temporary and that the pace of price hikes will taper off, they’ve acknowledged the risk that upward price pressures may be more persistent.