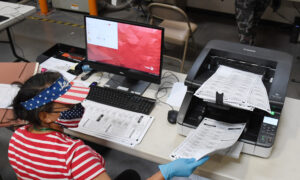 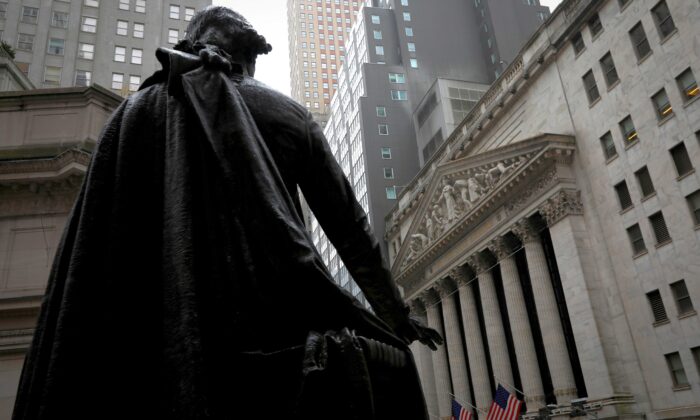 A statue of George Washington stands at Federal Hall across Wall Street from the New York Stock Exchange in Manhattan in New York City, on Oct. 26, 2020. (Mike Segar/Reuters)
Markets

Wall Street rallied, oil extended recent gains, and both gold prices and bond yields lifted on Election Day, delivering somewhat mixed signals as investors mull the aftermath of one of the country’s most divisive presidential races.

Reinforcing the risk-on sentiment was a rise in yields on the benchmark 10-year U.S. Treasury note, which climbed by 5.63 percent to a yield of 0.889 percent at 11:48 ET. Bond yields rise as government securities, which are considered a safe asset, are sold off.

Delivering a contradictory message was the move in gold, also a safe haven, with the yellow metal rising on Election Day as the dollar slipped and ambiguity regarding the declaration of U.S. presidential results possibly weighed on some investors, who sought refuge. Spot gold rose 0.61 percent to $1,906.40 per ounce by 11:53 a.m. ET.

“The sole driver behind gold prices is the high likelihood that there is going to be chaos surrounding the U.S. elections, from the predictions of not having a president by tonight,” said Jeffrey Sica, founder of Circle Squared Alternative Investments.

Bullion also received support from a falling dollar, with the DXY index falling by 0.67 percent at 11:59 a.m. ET.

“We’re going to break above $2,000 an ounce levels with a potential of an all-time high by the (presidential) inauguration (on Jan. 20),” Sica said, adding that gold is going to have significant momentum until the next president is decided and then it will depend on further stimulus.

“The jump has borne all the hallmarks of a massive, logical, and even inevitable short-covering prior to the U.S. presidential election,” said Tamas Varga of oil brokerage PVM.

“It would be tempting to conclude that the recovery from last week’s slump is now under way, but it is simply not a plausible scenario.”

Although Democratic nominee Joe Biden leads in national polls, Trump has narrowed the spread, particularly in key battleground states, with the competition in swing states seen as close enough that the president could secure the 270 Electoral College votes he needs to stay in the White House for another four years.

Polling is in the spotlight once again in 2020, with questions about whether the so-called shy voter phenomenon is undercounting support for Trump, who has narrowed the gap in the key battleground states of Arizona, Florida, Michigan, North Carolina, Pennsylvania, and Wisconsin to 2.3 percentage points in favor of the challenger. The memory of the polling inaccuracies in 2016 looms large, when Trump trailed in the vast majority of pre-election polls but went on to sweep key battleground states and won the Electoral College.

In 2016, polls showed former Secretary of State Hillary Clinton with a lead of around 4 percentage points, relatively close to her 2.1-point margin in the popular vote. Biden is up by an average of 6.7 percent nationally but just 2.3 percent in the battleground states, suggesting that while polls in 2020 would need to be off by a wider margin than in 2016 for Trump to win, a victory for the incumbent isn’t out of reach.

Despite a pandemic-driven crash earlier this year, the S&P 500 has risen about 55 percent since Trump clinched his extraordinary victory in 2016 as lower tax rates under his administration boosted corporate profits.