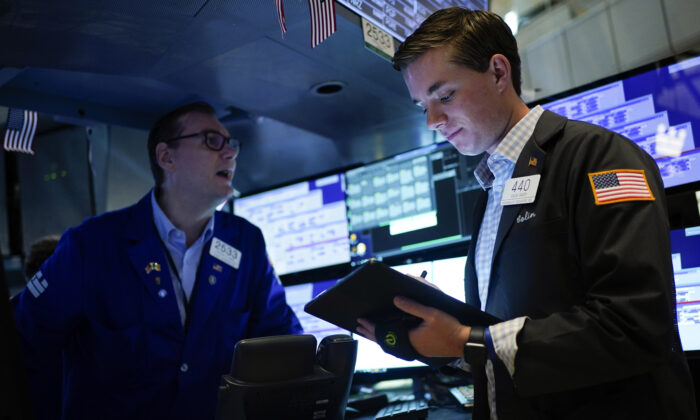 Traders work on the floor at the New York Stock Exchange in New York on June 15, 2022. (Seth Wenig/AP Photo)
Markets

NEW YORK—Stock indexes closed mostly lower Friday after a roller-coaster day following a strong report on the U.S. jobs market that offered both good and bad news for Wall Street.

The benchmark S&P 500 ended just 0.2 percent lower after recovering from an early slide as investors reacted to the report, which showed that U.S. employers unexpectedly added hundreds of thousands more jobs than forecast last month.

The blistering data suggests the economy may not be in a recession, as feared. But it also undercuts investors’ speculation that a slowing economy may mean a peak for inflation soon. That means the Federal Reserve may not let up on its aggressive rate hikes to combat inflation as early as hoped. And much of Wall Street still revolves around expectations for rates.

“It’s a reminder for investors on how uncertain Fed policy is going forward and the strong jobs market data shows just how far the Fed has to go,” said Charlie Ripley, senior investment strategist at Allianz Investment Management.

Stocks of technology and other high-growth companies once again took the brunt of the selling amid the rising-rate worries. The tech-heavy Nasdaq composite cut its early losses and closed down 63.03 points, or 0.5 percent, at 12,657.55.

The good news on the jobs market helped to limit losses for the Dow Jones Industrial Average, whose stocks tend to move more with expectations for the overall economy. It added 76.65 points, or 0.2 percent, to close at 32,803.47.

Beyond the nation’s strong hiring, wage growth for workers also unexpectedly accelerated last month. That’s helpful for households trying to keep up with the fastest price gains in 40 years. But it also raises worries on Wall Street that inflation will become more embedded in the economy.

Higher wages can cause companies to raise prices for their own products to sustain profits, which can lead to something economists call a “wage-price spiral.”

To be sure, some market watchers also pointed to numbers within Friday’s employment report suggesting the jobs market may not be as strong as the overall numbers imply. The number of people with multiple jobs rose by more than half a million, for example, said Brian Jacobsen, senior investment strategist at Allspring Global Investments.

“That was mostly from people who already have a full time job and then the second job is part time,” he said. “Maybe this is more superficially impressive than substantively impressive.”

Wall Street’s clearest moves came from the bond market, where Treasury yields shot higher immediately after the release of the jobs data. The two-year Treasury yield, which tends to track expectations for Fed action, jumped to 3.23 percent from 3.05 percent late Thursday. The 10-year yield, which influences rates on mortgages, rose to 2.84 percent from 2.69 percent.

Wall Street is coming off the best month for stocks since late 2020, a rally driven mostly by what had been falling yields across the bond market. The hope on Wall Street had been that the economy was slowing enough to get the Fed to ease up on its rate hikes.

Higher mortgage rates had cut into the housing industry, in particular, after the Fed raised its short-term rates four times this year. The last two increases were triple the usual size, and the Fed has raised its benchmark overnight rate from nearly zero by 2.25 percentage points.

“Today’s print, coming in much stronger than anticipated, complicates the job” of the Federal Reserve, Rick Rieder, BlackRock’s chief investment officer of global fixed income, said in a statement. He said the assumption now becomes the Fed raising short-term rates by another 0.75 percentage points next month, unless next week’s highly anticipated report on inflation “shows some dramatic weakness, which seems highly unlikely at this point.”

Traders scrambled to place bets for bigger hikes coming out of the Fed’s next meeting. They have flipped their expectations from a day earlier and now largely expect the Fed to hike by 0.75 percentage points, instead of by half a point.

Such increases hurt investment prices in the near term, and they raise the risk of recession further down the line because they slow the economy by design.

Such expectations also mean the two-year Treasury yield remains above the 10-year yield. That’s unusual, and some investors see it as a sign of a recession hitting the economy within the next year or two.

On Friday, Warner Bros. Discovery fell 16.5 percent for the biggest loss in the S&P 500 after reporting weaker results for the latest quarter than analysts expected. Monster Beverage lost 5.2 percent after it reported weaker profit than expected, though its revenue was stronger than forecast.

In overseas stock markets, India’s Sensex rose 0.2 percent after the Reserve Bank of India raised its benchmark interest rate by a half percentage point to 5.4 percent.