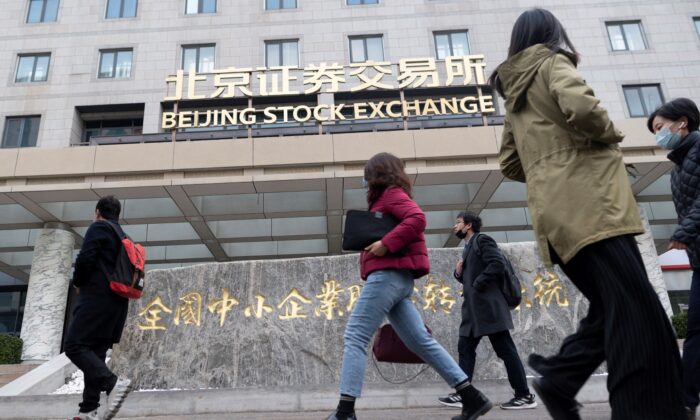 People walk past the Beijing Stock Exchange on its first day of trading in Beijing, on Nov. 15, 2021. (Wang Zhao/AFP via Getty Images)
China Business & Economy

A Chinese Wall Street banker and venture capital tycoon was taken away by Beijing public security forces for alleged misappropriation of funds.

Caixin, a Chinese financial media, reported the arrest of Wang Chaoyong, 56, through multiple sources on Dec. 16. The same day ChinaEquity Group also announced that it has neither been able to contact  Wang, who serves as the company’s chairman, nor received any notice from the public security and judicial authorities. The company issued a stock suspension statement (pdf) saying that exchanges would be suspended from that day until Dec. 29.

Chinese authorities have been moving to target private equity giants. According to state-run People media on Sep. 3, China’s central bank had issued a report, saying the authorities had made progress in lessening risky trading venues of private equity funds and financial assets, and will be maintaining the stability of the stock market, debt market, and currency market.

On Sept. 2, Chinese leader Xi Jinping announced the establishment of the Beijing Stock Exchange (BSE) at the Global Trade in Services Summit of the 2021 China International Fair for Trade in Services. On Nov. 15, the BSE opened for trading.

However, ChinaEquity in recent years has been facing an imminent financial crisis. Its 2021 semi-annual report (pdf) released on Aug. 31 showed a 377 percent decline in basic earnings per share compared to the same period last year. Due to Wang’s high-risk investments involving significant debt, the company experienced major losses and numerous lawsuits.

Wang bought shares and took control of a listed company with the funds it had scraped together, but he had no chance to “bleed back” his own financing through the secondary market leading to significant losses. ChinaEquity suffered a combined loss of about $288 million in 2020 and the first half of this year. In addition, it encountered six lawsuits totaling over $204 million, and seven financial litigations with Shenzhen Hifuture Electric.

According to  Uncrowned Business News, Wang acquired part of Shenzhen Hifuture Electric’s shares in May 2016 for a premium of up to 113.7 percent and $259 million in cash, most of which, came from financing and borrowing—a highly leveraged acquisition that shook the financial sector at the time. However, Wang didn’t expect that four months after acquiring Shenzhen Hifuture Electric, that in September 2016, the Securities Regulatory Commission would amend the administrative measures for the reorganization of major assets of listed companies. The commission began to tighten the audit of cross-border mergers and acquisitions, in order to strictly prevent equity investment institutions from disguising themselves as shell listings.

Wang, a native of Hubei Province, entered Wall Street when he was a 22-year-old student, and has worked since then at JPMorgan Chase Bank, Standard & Poor’s, and Morgan Stanley. He served as vice president of Morgan Stanley Asia and chief representative of the Beijing Representative Office. He was once called the “Wall Street Chinese prodigy” during the 1980s and 1990s.

In 1998, Wang, as a senior advisor, participated in the preparation and formation of China Development Bank’s investment banking business.

According to ChinaEquity’s official website, in addition to being the chairman of the group, Wang is also the financial expert of the Communist Party’s United Front Work Department.