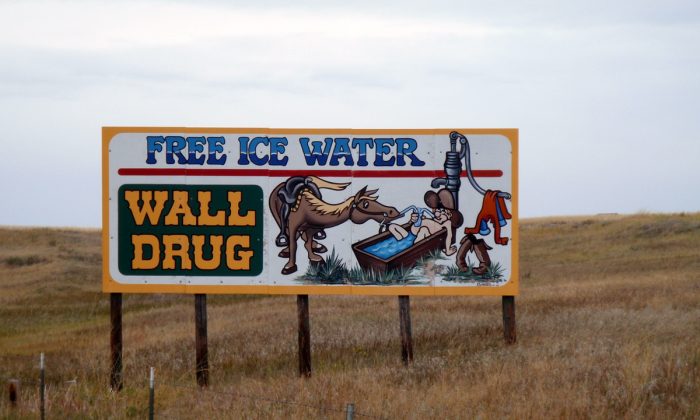 There are about 200 billboard signs that proclaim Wall Drug along South Dakota highways. This one mimics the very first sign Dr. Ted Hustead put up at the suggestion of his wife Dorothy in 1936. It offered thirsty travelers free ice water. The tradition continues and coffee is still five cents. (Myriam Moran copyright 2014)
News

When South Dakota became a state in 1889, the West was still a vast wilderness. Dakota Territory was a land of rolling prairies, magnificent mountains in the Black Hills and home to many tribal nations that comprised the first peoples of the area. Many homesteaders planted their roots, their hopes and aspirations in the land. The 1875 gold rush into the Black Hills was over, miners left or took jobs with the big, hard rock mining companies that used machinery to extract gold from deep tunnels into the earth. Farmers came from Europe to make their lives in this harsh environment. There were freezing cold winters, floods and droughts, plagues of locusts and hardships. The hardy proved up their claims and raised families.

When the Great Depression hit America in 1929 many Dakotans fell upon economic hard times. It was in the midst of the hard times that Ted Hustead, his wife Dorothy and their three year old son Dwight William ‘Bill,’ arrived in Wall, South Dakota. The town wasn’t named for anyone, it was just the place where the Badlands were stopped by a wall of plateaus. The town had a rutted, unpaved main street, three-hundred inhabitants and dilapidated wood frame buildings. A freight railroad came through town and U.S. Highways 14 and 16 passed nearby.

It was the very end of the year when 29-year old pharmacist, Dr. Ted Hustead brought his family to Wall. December 31, 1931, began as all days in the cold winter of the Dakotas began. There was desolation. For the family there was also hope and a new beginning.

The son of a country doctor from Phillips, Nebraska, Ted inherited $3,000 from his father. Young Ted started out to become a doctor himself enrolling at the University of Nebraska Medical School. He Met Dorothy then lost the sight in one eye and dropped out of school. He took a job with a pharmacist, married Dorothy, returned to school and became a pharmacist. Ted and Dorothy graduated in 1929, his wife in fine arts and English and Ted in pharmacy. Ted took a succession of jobs working in drug stores.

The Husteads, with the small inheritance, began to look for a store of their own. Dorothy’s mandate was a Catholic church close enough to go to daily mass. The store they found was a wooden building 24 x 60 feet on the western side of Main Street smack in the center of Wall. It had a magnificent soda fountain and was next to the bank. The couple toured town and met the doctor who promised to send them all his prescription business if they bought the store. Their next stop was the parish priest who only opened his door a crack suspecting the couple were panhandlers. They became friends with the pastor who encouraged them to buy the store. The banker in town was friendly. That was that. By December 31, 1931, the Husteads were in possession of what was to become Wall Drug Store. Two girls and another boy were born to the Husteads in Wall.

Electricity was scarce in those days. The Husteads had to buy it from a garage-man that had a diesel generator. The beautiful soda fountain needed a lot of electricity to keep ice cream frozen. The family moved into the back of the store with a curtain dividing it from the retail space. They survived. Five years later, on a hot, dusty Sunday, Dorothy got an idea. They could hear cars passing along the highways nearby. Nobody got off to stop in Wall. Dorothy figured these travelers must be thirsty. With the idea from Burma Shave signs in mind Dorothy handed Ted a piece of paper on which she penned: “Get a soda, get a beer, turn next corner, just as near to Highway 16 and 14, FREE ICE WATER, Wall Drug.” The sign was shortened to get it to fit a board. “Free Ice Water—Wall Drug.”

Before the signs were all up cars started stopping. It worked. Ted went sign crazy. He put up a twelve-foot arrow on the highway pointing to Wall Drug. More and more signs, more and more customers. A legend was born.

Wall Drug grew and business was booming. Ted bought a building and installed it across the street from the pharmacy and moved the business. World War II came along and son Bill joined the Navy during his senior year at high school. After the war he married ‘Punky’ Rensch and earned his pharmacy degree at South Dakota State University in 1950. Bill had many novel ideas to attract business. He created a cafeteria then began expanding. When Bill’s father Ted died in 1999, at the grand age of 96, Bill took over running Wall Drug. Bill entered politics and served in national and state offices. Bill died from Lou Gehrig’s disease leaving two sons to run the business.

Ted, named for his grandfather, and Rick, the oldest brother, took the reins of Wall Drug. Rick became Chairman of the Board. Rick started working at Wall Drug as a little boy. He eventually earned twenty-five cents an hour. Two children, Jon and Sarah, were born to Rick and Patt. Ted came back to work at the family enterprise after his stint in the oil fields as a well driller. Ted learned business as a boy beside his father Bill. Now, as President of Wall Drug, he attended Harvard Business School to study strategic finance for small businesses. Ted, or Teddy as most everyone in Wall calls him, retired this year to devote more time to his family leaving Rick Hustead in charge.

Wall Drug is an American institution. Teddy Hustead once remarked that what visitors like most about Wall Drug is the family story behind it. The enterprise has become one of America’s most popular roadside attractions. The backyard has a roaring Tyrannosaurus rex, a water park, the model of a bucking bronc for young and old to get photos astride and beautiful gardens. There is even a chance to mine for placer gold.

True to tradition instituted by the founders, there is still free ice water. Best of all coffee is only five cents. A Jakalope is on display. Many people ask whether it is real, although a cross between a rabbit and antelope is indeed a rarity. There are books and fine jewelry. A pharmacist is on duty for prescriptions. The store sells drugs and notions. There is a traveler’s chapel, a restaurant that serves good food. Wall Drug has a world class collection of about 300 original western art works on display. There are many bronze sculptures.

The wood paneled dining room is branded with ranch symbols from the South Dakota brand book. Art work by famous American illustrators is everywhere. The art is so accessible and present that people often do not imagine that they are originals. Don’t try to pry U.S. silver dollars up from under the cafeteria counter.

Today’s Wall Drug is still a family enterprise. “Myself, my daughter Sarah, my wife Patt and mother Marjorie all work here,” Rick Hustead said. “I grew up in the 1950s and 1960s. There were missiles in silos all over South Dakota. The Cold war was a reality. I used to serve coffee when I was nine years old to folks building missile installations,” Rick explained. It was an exciting time for a little boy growing up with the Badlands just across the highway and plenty of room to play.

Rick worked with his father Bill for eighteen years. He recalled the early days of Wall Drug and the family history with fond attachment to his roots. “We make the most delicious home made fudge. We serve 30,000 pounds of roast beef every year. We have eight flavors of home made ice cream and we still have an old fashioned soda fountain.”

The Husteads are justly proud of their collection of eleven original oil paintings by world renown South Dakota artist Harvey Dunn. The dining room is decorated with larger than life carved sculptures in red cedar of the four Native American chiefs that defeated Custer at the Little Big Horn. The dining room is paneled with black walnut.

Of the many billboards that dot the highways leading to Wall, Rick says,”We have about 200 signs advertising Wall Drug in South Dakota. We have them in Wyoming and Minnesota. We just found an old sign in a field that dated to 1955. On a busy day we get 15,000 visitors.”

Sarah Hustead is 26 years old. “I kinda like working in the cafe when three tour buses are coming through. I like it when we are just jammed,” she said.

She helped her father with a group then returned to the jewelry counter, one of her favorite places to work. “I took over jewelry in January 2014. That’s fun. I like selling. I like helping someone find the perfect item. I like seeing so many different people,” Sarah added. When asked about a tattoo on her forearm Sarah smiled and said, “That’s the Hustead brand.”

Like her father before her, her grandfather and great-grandfather, Sarah Hustead is now the fourth generation to carry on the Wall Drug tradition. Visitors enjoy interacting with the Husteads. Many have their own stories to tell about times they shared with the family and visits they made with their own families long ago. Fond memories of an American tradition that should be around for many more generations to enjoy.