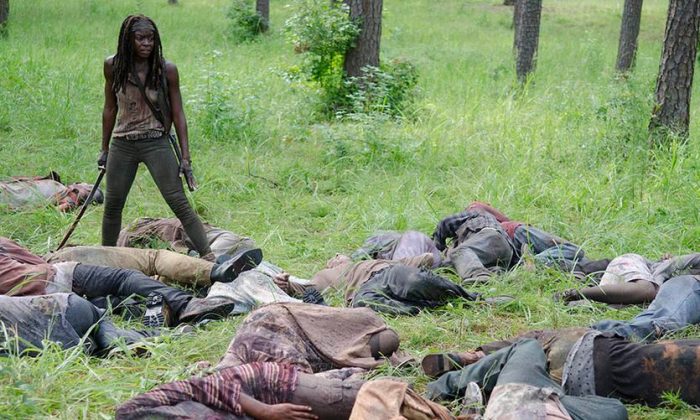 The Walking Dead spinoff has been ordered to pilot, as expected, and filming will start later this year.

The companion series will not feature characters from the main show. Casting details haven’t been announced yet but should be forthcoming.

“Almost from the beginning of The Walking Dead on AMC, fans have been curious about what is going on in the zombie apocalypse in other parts of the world. In fact, beyond requests for zombie cameos, it’s the question I get asked the most,” said AMC President Charlie Collier in the announcement.

“Obviously, we all take our stewardship of the original franchise incredibly seriously and we, along with Robert, Gale, David and now Dave, are all proceeding with extreme care in order to ensure that we are offering fans something truly compelling, engaging and distinct. We’re thrilled to be taking this next step with these remarkable partners.”

“There are many corners of The Walking Dead universe that remain unseen in the shadows. Being given the opportunity to shine a light into those corners and see what lurks out there is an absolute thrill. I know the fans are anxious to hear what Dave and I have been cooking up for this new universe of The Walking Dead, and I’m happy to be one step closer to sharing it with them,” said Robert Kirkman.

Kirkman previously confirmed that the new series will not take place in Georgia, and could be somewhere outside the United States.

“It’s going to be set in this world, but it is a new cast and a new setting, and it’s going to be very different. It’s just exciting to be able to start over again and try to do cool stuff,” Kirkman previously told IGN.

“The opportunity to make a show that isn’t tethered by the events of the comic book, and is truly a blank page, has set my creativity racing,” he said in the original announcement.

The need for the new series is pretty obvious, but has been made clearer by the recent premiere of SyFy’s “Z Nation.”

That show also features zombies, but comes up far short of what The Walking Dead delivers.

In fact, there really is no show comparable to The Walking Dead on television right now. The companion series will help bridge the gap between the long wait following a season finale and through to a season premiere. It’s expected to air between seasons, though that hasn’t been confirmed.