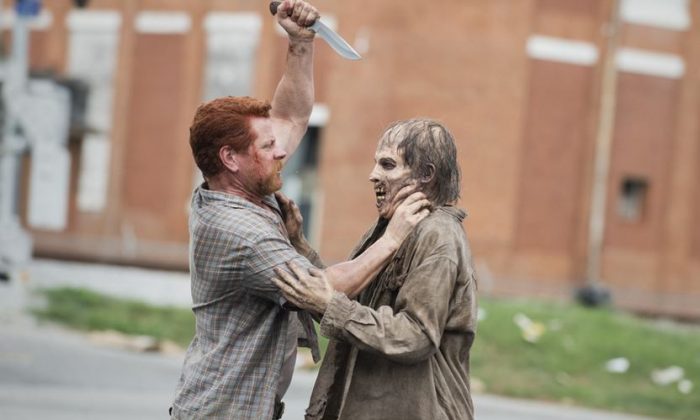 Walking Dead Season 5 Spoilers: Rosita Hooks Up With Eugene or Abraham in Episode 5

The Walking Dead season 5 returns on Sunday with an all-new episode that reportedly features two couples hooking up, one of them being Glenn and Maggie.

SpoilerTV, which previewed the episode, says that Glenn and Maggie hook up and also another couple but wouldn’t name the other couple.

But it’s likely Rosita and Abraham and Rosita and Eugene. In the comic book version of The Walking Dead, Rosita first dates Abraham but later becomes involved with Eugene following Abraham’s death.

Another big spoiler for the episode is that Abraham’s backstory will be revolved in multiple “informative” and “surprising” flashbacks leading up to his meeting Eugene.

In the comic books, Abraham lost his wife and daughter just prior to meeting Eugene and Rosita.

His backstory hasn’t been mentioned much in the television show, although Abraham noted at one point in season 4 how his group was much bigger at one point but some people had died.

Another spoiler is that one character will be injured during a fight against walkers. Because “injured” is the word used, the character likely isn’t bitten but that’s always a possibility.

There will also be several scenes with lots of walkers being killed.

“There will be two great and epic killing walkers scenes. In one of them, the survivors will use something new to get rid of those zombies. It will prove to be very effective, maybe even more than the fire and explosion of the season premiere.”

Other spoilers come via Spoiling Dead Fans, which revealed that Eugene confesses his lies about Washington, D.C. and the cure.

The scene in the video promo where Abraham breaks down and cries is also because of Eugene.

A big mystery is why Abraham kills a man in the episode. SDF says that it may be the man who raped Abraham’s family in the comic book version.