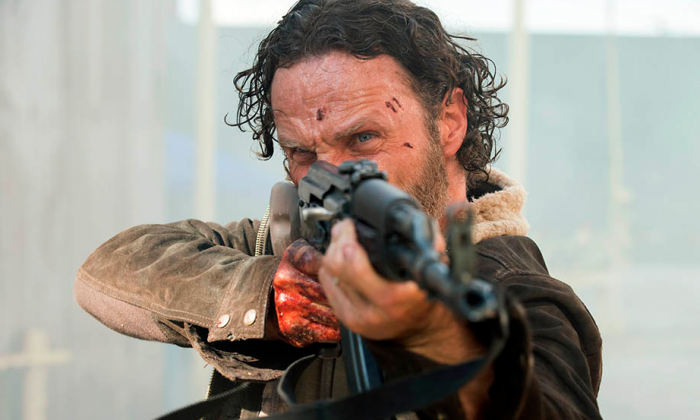 Walking Dead Season 5 Spoilers: Who Dies? And Negan Appears to be Confirmed

Some major spoilers have emerged for The Walking Dead episode 1, which will air on Sunday, October 12.

Turns out that the residents of Terminus are cannibals, according to the Spoiling Dead Fans. “It’s implied that they’re cannibals,” it says.

The spoilers obtained by the page also indicate that viewers find out why the residents capture people.

And the entire group other than Beth is reunited by the end of the episode–but Tyreese initially stays back with baby Judith while Carol attempts some sort of rescue. She and Tyreese find out about Rick’s group being captured by someone they come across.

Probably the most major spoiler is that no one is Rick’s group dies in the premiere–but Sam does die.

In addition, there’s a flashback in the episode that involves part of the back story for Terminus.

Meanwhile, it seems to have been confirmed that Negan will appear in the season. First, a clipping from an upcoming issue of Us Magazine says that he will appear (with his bat Lucille). And then actor Kevin Durand (“The Strain”) told reporters that he’s been approached to play Negan in The Walking Dead show.

Also, more reviews of episode 1 have been coming out, with one from Variety calling it “a feast.”

“Lest anyone has forgotten, our intrepid band of zombie apocalypse survivors found themselves scattered far and wide for much of last season, gradually following the signs, in smallish groups, to the promise of sanctuary in a place called Terminus. That hope, however, gave way to something more sordid upon their arrival, as the inhabitants of Terminus locked them up, with the survivors’ leader, Rick (Andrew Lincoln), vowing escape,” it said.

“How that plays out, however — in an episode written by showrunner Scott M. Gimple (the program’s third in five seasons) and directed by former special-effects mastermind Greg Nicotero — is so ingenious, and operates on so many tracks simultaneously, as to make the initial hour (OK, 43 minutes sans commercials) fly by. At the same time, the episode fosters a real sense of jeopardy even for those characters who, presumably, aren’t quite so apt to meet an untimely end.”