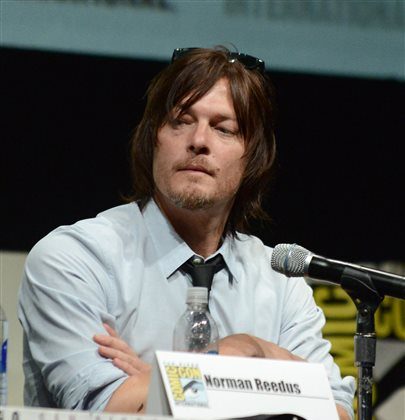 He didn’t reveal much about what’s happening in the forthcoming season, which starts Oct. 12 on AMC, but he did say: “You’d be surprised, the creative ways that they come up with doing that, that you haven’t seen before. It’s kind of mind-blowing. Just wait till this season; there’s some new stuff that’s like I never would have thought of. It’s pretty hard-core,” according to an interview with GQ.

“He’s definitely not a ladies’ man or thinks of himself as having enough confidence to be that type of person. I want to play him searching for confidence, not full of confidence, you know what I mean?,” he said.. “I like all the little things that are awkward. I like when a boy meets a girl, doesn’t know what to say, and says the wrong thing, and she notices that, and he notices that she notices that. I think that’s all very interesting, and I would rather play him like not somebody that’s got cool-guy moves or anything like that.”

Meanwhile, Gleen actor Steven Yeun spoke about his character’s development in an interview with EW.com a few days ago.

“We first met him as the plucky kid who’s kind of down to do anything,” he said. “But wasn’t really watching out for himself. We found him take value in himself. We found him grow into himself. I think this apocalypse had made him into someone that is reaching his true potential, whereas society might mot have let him get there.”

He added: “He’s really getting to know what he’s made of. He’s proved his worth quite a bit. At this point we also see him very hardened. Even though he does seek humanity, he does seek hopefulness, there is a semblance of understanding the world that he lives in, which is very brutal and I think it’s this struggle that he kind of wars with in his own mind which is, which way do you go? And I think he’s still growing in that respect. But he’s definitely probably the man he never dreamed he could be at this point.”