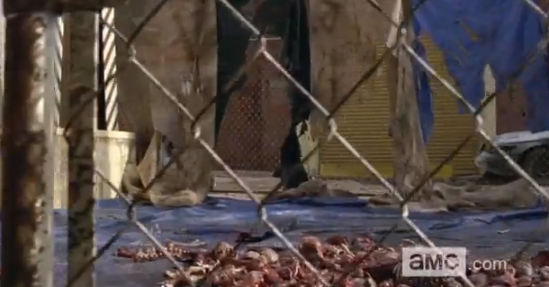 Terminus was more fully revealed on the season 4 finale of The Walking Dead, and it looks like it is in fact full of cannibals.

The most damning evidence may be the pile of what appears to be skin and bones seen while Rick, Carl, Michonne, and Daryl are running through Terminus while being shot at.

The residents aren’t actually intent on shooting the four–instead they aim at their feet while guiding them into an area right next to a boxcar.

The four are forced into the boxcar and find Glenn’s group inside.

That’s the other big piece of evidence–keeping people in boxcars. While the four were running there were two other boxcars that people were yelling for help from.

These pieces of evidence play into the connection people have been making between the Terminus residents and the Hunters, a roving band of cannibals who had a base at an abandoned house in the comics.

Instead of killing them right away, the Hunters would trap them and eat them slowly, putting tourniquets on their wounds.

Unfortunately, season 5 isn’t set to premiere until October 2014, so the fate of Rick’s group in the television show will be unclear for quite some time.

There’s only four people who aren’t in the boxcar at Terminus–Carol, Tyreese, baby Judith, and Beth.