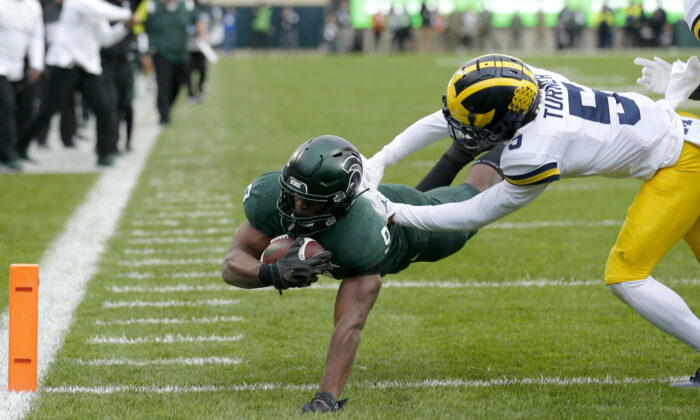 EAST LANSING, Mich.—Kenneth Walker earned the right to stump for Heisman Trophy votes and humbly refused, shaking off questions about the coveted award as if they were linebackers trying to tackle him.

Walker ran for 197 yards and five touchdowns, helping No. 8 Michigan State top No. 6 Michigan 37–33 for a thrilling comeback win on Saturday.

“I don’t feel like it was a Heisman moment,” said Walker, who started the day leading the nation in rushing and finished it with 1,194 yards rushing and 15 touchdowns. “But it was just a great team win.”

The Wake Forest transfer had a lot to do with it.

The Spartans (8–0, 5–0 Big Ten) trailed by nine at halftime and 30–14 with 6:47 left in the third quarter before rallying as Walker boosted his chances of being selected college football’s most outstanding player.

Walker’s fifth touchdown—a 23-yard run—lifted the Spartans to a 37–33 lead with 5:08 remaining. He had 8.6 yards a carry, an average that spiked thanks to his 58-yard touchdown that helped the Spartans pull into a 30-all tie early in the fourth quarter.

“This was a huge stage, the whole world was watching, and you got a chance to see what type of player he is,” coach Mel Tucker said. “Any recognition he’s getting for Heisman consideration is well deserved.”

After a roughing-the-passer penalty gave them the ball at midfield, Michigan State cornerback Charles Brantley sealed the victory by picking off a floating pass from Cade McNamara.

“This one stings,” McNamara said. “We have to respond. Our backs are against the wall now.”

McNamara threw for 383 yards and two touchdowns, but his interception was costly, as was freshman quarterback J.J. McCarthy’s lost fumble on an attempted handoff in the fourth quarter.

“That exchange didn’t go smoothly,” said Harbaugh, who said McNamara was “working through something,” when he the freshman replaced him.

Michigan State’s win puts the program in contention for the Big Ten conference championship and potentially a spot in the College Football Playoff.

Michigan’s loss leaves Jim Harbaugh with a 3–4 record against Michigan State as a coach, putting even more pressure on him to earn his first victory against No. 5 Ohio State next month.

The Spartans had some calls and reviews go their way, including one that overturned Payton Thorne’s fumble late in the first half that Aidan Hutchinson recovered in the end zone, but Harbaugh refused to publicly lash out.

“I made my thoughts known throughout the game,” he said.

The Wolverines started strong, leading 23–14 after an entertaining first half and by 16 points in the third quarter.

On their first drive, McNamara threw a 93-yard touchdown pass to former East Lansing High School star Andrel Anthony. After Thorne’s second interception, the Wolverines settled for the first of four Jake Moody field goals and a 10–0 lead late in the first quarter.

Walker bounced a run to the outside, finding a hole to sprint through for a 27-yard touchdown run on the first play of the second quarter.

Tucker went for it on fourth-and-1 near midfield and Thorne’s play-action pass to Jalen Nailor set up Walker’s 8-yard TD run and a 14–13 lead.

Anthony caught a 17-yard TD pass and Moody kicked a 35-yarder in the final seconds of the first half. McNamara tacked on another TD pass in the third, finding Mike Sainristil for a 19-yarder that made it 30–14 with 6:47 left.

Tucker went for it again on fourth down late in the third as Thorne threw a 28-yard pass to Jayden Reed to set up Walker’s third touchdown.

Michigan State was 0 for 7 on third down until converting three straight on one drive, including Walker’s 58-yard touchdown run.

Michigan State: Tucker has a ton of momentum with an 8–0 record this year and a 2–0 mark against the in-state rival, becoming the first Michigan State coach to win his first two games against the Wolverines.

Michigan State and Michigan may flip spots in the AP Top 25 after living up to the hype with a closely contested game.

“That was an epic game,” Tucker said.

The Spartans have won 10 of the last 14 games against Michigan.

Michigan State: At Purdue on Saturday.