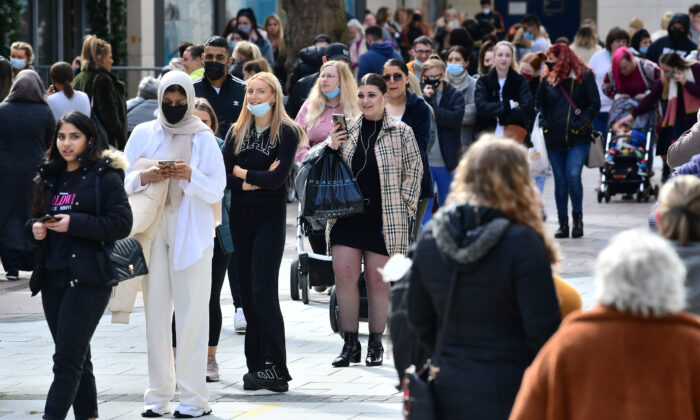 Mandatory COVID-19 self-isolation will end in Wales on Monday, as well as compulsory mask-wearing in shops and on public transport, the government has confirmed.

But masks will continue to be legally required in health and care settings, and businesses must continue to do CCP (Chinese Communist Party) virus risk assessments and put in place “reasonable measures” accordingly.

Self-isolation rules will become guidance on Monday, and First Minister Mark Drakeford said the government continues to “advise people strongly to wear a face covering in crowded indoor public places, including in shops and on public transport.”

The Welsh government previously planned to let all remaining CCP virus regulations lapse on Monday, but it decided to extend some of the rules by at least three weeks due to what Drakeford called “an unwelcome rise in coronavirus cases across Wales.”

“We have carefully considered the very latest scientific and medical evidence and we need to keep some legal protections in place for a little while longer, to help keep Wales safe,” Drakeford said.

In a press conference on Friday, Drakeford called the decision a “difficult but careful balance.”

Touting the CCP virus vaccination program as “the single most important protection that we have,” Drakeford said Wales “can’t go on relying forever on the force of the law to keep us safe” from the virus.

Drakeford also said that while there have been more CCP virus cases, the number of serious cases remained steady.

“The levels in intensive care have remained broadly stable for the last ten days,” he said.

A review of the remaining regulations is due on April 14, when the government will confirm whether to keep them beyond April 18.

In Scotland, the legal requirement for businesses to retain customer contact details for contact tracing became guidance on Monday.

But the mask mandate in Scotland, which was previously expected to expire on Monday, remains in place for “a further short period,” making Scotland the only nation in the UK that still requires mask-wearing by law.

The rule on mask-wearing in shops and on public transport is due to be reviewed early next week and could become guidance on April 4.

But secondary school teachers and pupils will be required to wear masks in communal areas after Easter.

“Following the Easter break, face coverings will continue to be required in communal areas for staff and secondary school pupils,” a Scottish government spokesperson said on Wednesday.

“This national guidance will apply in every school in Scotland.”