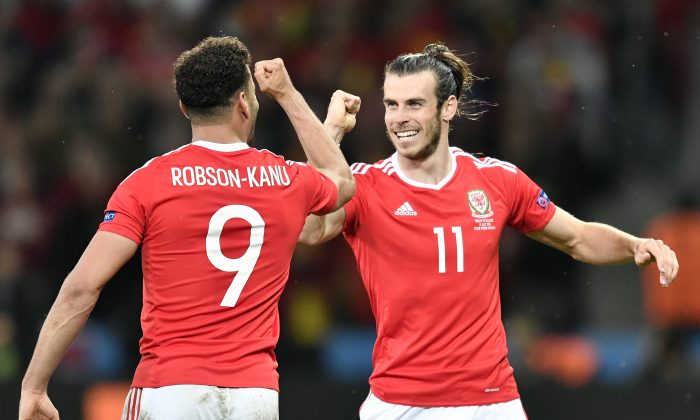 LILLE, France—Wales stormed back from a goal down to beat Belgium 3-1 in a pulsating quarterfinal on Friday at the European Championship.

This time Wales did not need to rely on its star player Gareth Bale, as it fought back from trailing in the 13th minute to secure its first ever berth in a semifinal of a major tournament.

Unheralded forwards Hal Robson-Kanu and Sam Vokes settled the game with goals in the 55th and 85th minutes. In Robson-Kanu’s career-best moment, he deceived two defenders with a ‘Cruyff turn’ and placed a shot past Belgium goalkeeper Thibaut Courtois.

Vokes came on as a substitute to meet Chris Gunter’s cross with a glancing header and spark wild celebrations in the Welsh corner of a stadium packed with Belgium fans.

Wales captain Ashley Williams had dragged his team back into the game in the 30th when he stooped to head in a corner, after midfielder Radja Nainggolan had given Belgium the lead with a rising right-foot shot from 25 meters.

Belgium had its chances, and forward Romelu Lukaku missed badly from close range when his team made fast starts in each half.

Still, Wales deservedly advances to a semifinal against Portugal next Wednesday in Lyon.

That game is sure to be billed as a clash of Real Madrid stars — Bale and Cristiano Ronaldo.

Wales turned things around after seeming to be outplayed in the first half of what was almost a home game for Belgium just 10 kilometers from its border.

By conceding Rainggolan’s spectacular strike, Wales failed to open the scoring for the first time in five games at Euro 2016.

Even before, Belgium had four clear chances in a hectic seventh minute. Rapid-fire shots from Yannick Carrasco, Thomas Meunier and Eden Hazard were saved, blocked and deflected for a corner. When that was crossed in, Lukaku missed the ball from close range with the goal unguarded

Belgium’s early fast breaks stretched the Wales defenders, who collected three yellow cards before momentum shifted in the 26th. After Aaron Ramsey got behind the Belgium back line, Courtois was forced into a diving save from Neil Taylor’s sharp shot.