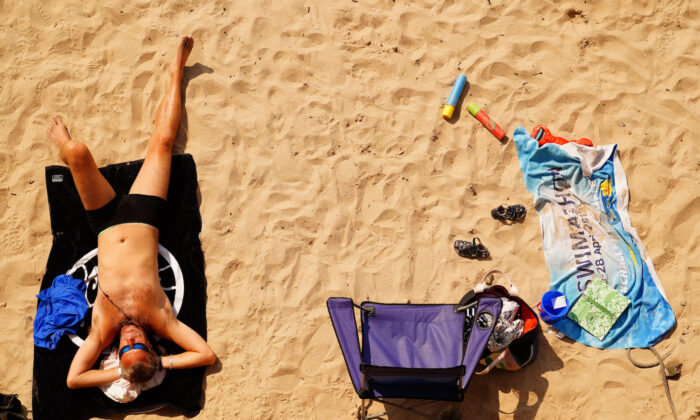 A man sunbathes on the beach in Mousehole, Cornwall, on July 18, 2022. (Ben Birchall/PA Media)
UK

The highest recorded temperature in Wales is now 37.1 degrees C, breaking a record set earlier the same day and the previous record set in 1990, according to provisional figures.

Much of England is also under a heatwave on Monday, with some school closures and airport runways melting.

A 16-year-old boy drowned in Bray Lake near Maidenhead, Berkshire, but Downing Street said on Monday afternoon that the NHS was “coping well” at the time, with no other heat-related fatalities.

The UK Health Security Agency has issued a level 4 heat-health alert for all regions of England for the first time since the system was introduced in 2004. The Met Office has also issued the UK’s first red extreme heat warning. Both are running from Monday to Wednesday.

On Monday afternoon, Wales provisionally recorded its hottest day on record after the temperature reached 35.3 degrees C in Gogerddan, near Aberystwyth, breaking the previous record of 35.2 degrees C in Hawarden, Flintshire, on Aug. 2, 1990.

The temperature needs to be verified before the record can be confirmed.

By 3 p.m., the highest recorded temperature in England on Monday was 37.5 degrees C at Kew Gardens in west London. Tuesday is expected to be warmer in some parts of the country, with the potential of reaching over 40 degrees C.

More than 100 schools are fully or partially closed because of the weather, including more than 50 in Buckinghamshire, four in West Berkshire, 17 in Cambridgeshire, and more than 30 in Oxfordshire.

Speed restrictions have been imposed on trains amid fears of rails buckling in the heat.

Network Rail, the UK’s public body for railways, said the number of passengers using major stations across Britain on Monday was around 20 percent fewer than a week ago.

Flights were disrupted at Luton Airport, which said in a statement that “a surface defect was identified on the runway” following high temperatures.

Sky News reported that the Royal Air Force (RAF) had halted flights to and from its Brize Norton base in Oxfordshire after the runway melted.

In a statement issued on Twitter via the Ministry of Defence, the RAF said: “During this period of extreme temperature flight safety remains the RAF’s top priority, so aircraft are using alternative airfields in line with a long-established plan. This means there is no impact on RAF operations.”