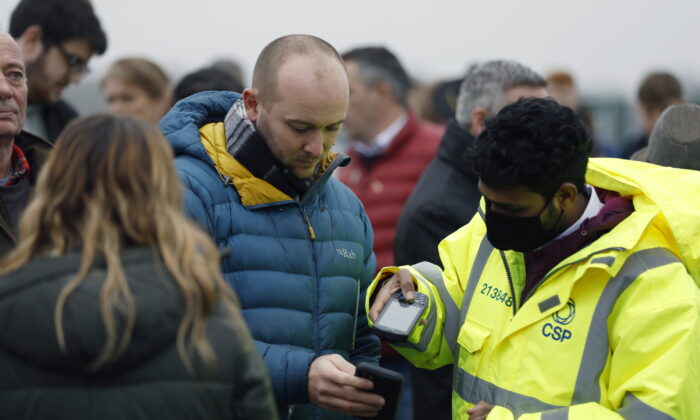 Covid passports have been scrapped in Wales (Steven Paston/PA)
UK

The Welsh government has scrapped the requirement for COVID-19 vaccine passports as a condition of entry for both indoor and outdoor events.

On Feb. 17, Dawn Bowden, the Welsh government’s deputy minister for arts and sport, announced the restrictions would be scrapped on the following day.

“With increasing numbers of people vaccinated and boosted and thanks to the hard work and efforts of everyone across Wales, we are confident that coronavirus rates are falling and we can look forward to brighter times ahead,” he said in a statement.

But the minister said venues could still demand proof of vaccination as a condition of entry if they choose to do so.

The opposition Welsh Conservatives, who have been critical of the use of COVID passes, welcomed the decision to drop the measures.

Shadow health minister Russell George said: “I am delighted to finally see the back of these totally failed, coercive, ineffective, costly, and unproven vaccine passports.

“This illiberal measure has never shown any sign of success, proving only to be a burden on businesses and consumers. Far from being worthwhile, they were harmful and disruptive.”

He said the Labour administration “should never have put them on the table in the first place” given “all the issues that came with vaccine passports and their lack of effectiveness.”

The Welsh government’s COVID-19 restrictions, which have been significantly more stringent than those in England, have also been criticised by the UK’s Conservative government.

Simon Hart, the UK government’s Welsh secretary, said last month the tighter controls in Wales had not produced better results than in the rest of the UK, and that “it is throttling the recovery and it is throttling economic activity.”

UK Prime Minister Boris Johnson signalled on Feb. 9 that people who test positive for the CCP (Chinese Communist Party) virus in England may no longer be legally required to self-isolate later this month.

This will mark the end of all domestic CCP virus restrictions in England.

“Our focus now moves to securing commitments to the end of all COVID laws and forcing the Labour government to end their focus on pet projects so Wales can get back on track and recover from the pandemic, even if Labour’s record suggests they will be incapable of doing so,” George said.