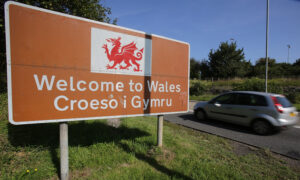 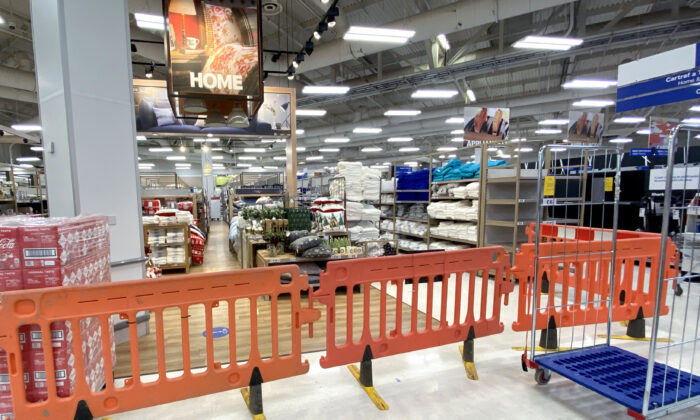 Non-essential items are blocked off in a Tesco supermarket in Cardiff, Wales, on Oct. 23, 2020. (Matthew Horwood/Getty Images)
UK

Welsh authorities are meeting with supermarkets and other retailers to discuss the rules that ban the sales of “non-essential” items during the two-week firebreak lockdown.

The announcement on Monday follows criticism and anger over supermarkets blocking aisles and covering shelves that stocked “non-essential items” over the weekend.

Health Minister Vaughan Gething said during a briefing that the rules already allow some discretion for people who are in “acute need to buy the basics which are essential to them”.

“We’re meeting retailers this afternoon to review the regulations and guidance to make sure that it is being applied fairly and consistently,” he told reporters. “If there are anomalies, we will look at whether the guidance needs to be revised or strengthened to make it clear that supermarkets have some discretion to sell to people who are in genuine need.”

He also said he was “saddened” by an exchange on social media, during which a woman was mistakenly told by a supermarket that sanitary products are non-essential after she found the health aisle blocked.

Gething sought to shift the focus onto the broader rationale for the firebreak measures, saying that the rules were the same as those in force during the spring lockdown, as he faced a barrage of questions about the “essential items” policy.

During the firebreak lockdown, people must stay at home, “except for very limited purposes, such as for exercise,” according to the government rules.

After the 17-day lockdown began on Friday, images of supermarkets covering up shelves in plastic stirred debate and headlines. To avoid unfair advantages over smaller retailers forced to shut, they had been told not to sell non-essential items.

The controversy deepened when it emerged that Tesco had told a woman via a tweet that sanitary products were not an essential item when she complained about the relevant aisle being blocked.

Tesco later apologized, saying that the tweet in question was a standard response sent in error and that the Health and Beauty area of the store had been closed off following a break-in due to a police investigation.

“Sanitary products are essential items and are available to customers in all of our stores in Wales,” a Tesco spokesperson told The Epoch Times via email. “The reply to this customer, which implied these products were non-essential, was sent by mistake and we’re very sorry for any confusion caused.”

First Minister Mark Drakeford previously said that the “firebreak” measures were strictly time limited and would come to an end on Nov. 9—even if numbers have not come down.

Drakeford said that the break was “a short, sharp, shock to turn back the clock, slow down the virus, and buy us more time”.