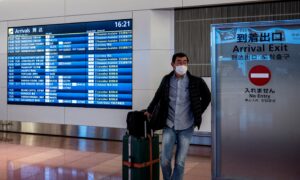 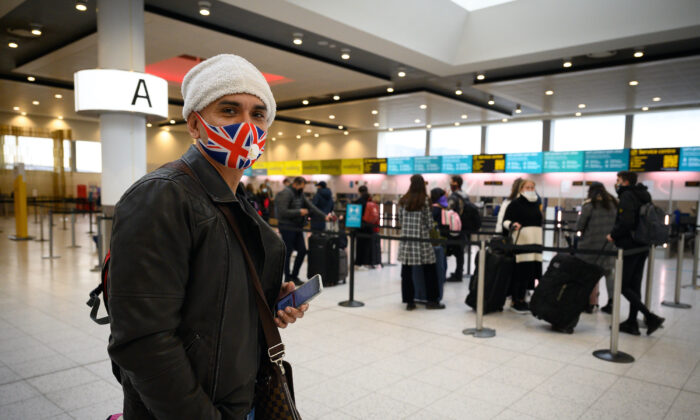 A passenger wearing a Union Flag face mask waits to board one of the few flights departing at Gatwick Airport in London on Nov. 27, 2020. (Leon Neal/Getty Images)
UK

Wales has joined England and Scotland in demanding inbound travelers test negative for the CCP virus before boarding their trains, planes, and boats.

“These new measures will help ensure we prevent new strains of the virus developing internationally from being imported into Wales,” Health Minister Vaughan Gething said in a statement on Jan. 15.

“We are already asking passengers returning from high-risk countries to self-isolate for 10 days and these requirements remain in place.”

The new measures will start from Monday, and require proof of a negative test, taken within three days before departure, for the CCP (Chinese Communist Party) virus, also known as novel coronavirus.

The measures do not apply to passengers from the rest of the UK, or from the Republic of Ireland, the Isle of Man, and the Channel Islands.

The government of Wales said it would help protect against new strains of the virus, “such as those seen in Brazil, Denmark, and South Africa.”

The emergence of a potential new strain in Brazil prompted the UK government on Thursday to announce a ban on travel from all countries in South America, and from Portugal.

The ban, which came into force on Friday, doesn’t apply to British or Irish Nationals or people with UK residency rights.

Prime Minister Boris Johnson said earlier this week that he was very concerned about the Brazilian variant of the virus.

Unlike the variant currently thought to be pushing a surge of the pandemic in the UK, there is not yet any evidence of faster transmission in the Brazilian variant.

“The Brazilian variant has three key mutations in the Spike receptor-binding domain (RBD) that largely mirror some of the mutations we are worried about it in the South African variant, hence the concern,” Ravi Gupta, professor of microbiology at the University of Cambridge, said in a statement.

“The SARS-CoV-2 RBD is one of the main targets for our immune defences and also the region targeted by vaccines, and changes within this region are therefore worrisome. Vaccines are still likely to be effective as a control measure if coverage rates are high and transmission is limited as far as possible.”

The UK government on Thursday issued full public guidance on pre-departure testing, including which types of test are acceptable.

Such tests include PCR and LAMP tests, which detect key chemical markers, and antigen tests from lateral flow devices.