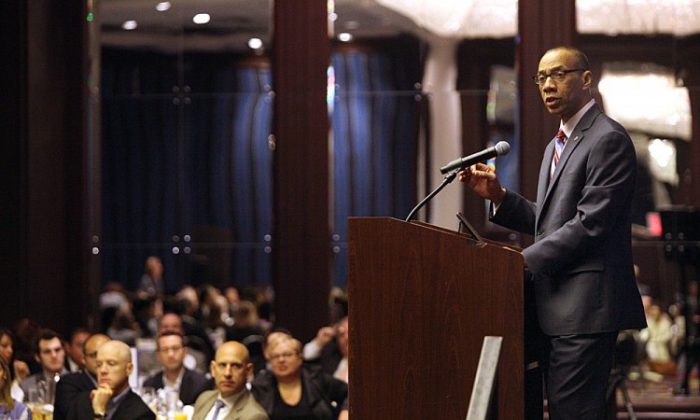 NEW YORK—New York City Department of Education Chancellor Dennis Walcott served up two new educational reforms at the Association for a Better New York breakfast in Midtown Manhattan on Thursday, including buyouts of nonpermanent teachers and a policy to remove poorly performing teachers after two years.

Walcott said the changes would help improve teacher quality in New York City Public Schools, setting off yet another round of tense back-and-forth between the DOE and the United Federation of Teachers (UFT).

New York City Council member Dan Garodnick said to Walcott during the questions and answer portion of the meeting, “I think that we all, and certainly the students, are counting on the DOE and UFT to find those ways that you can work together and that we hope you will do that.”

Walcott proposed to offer buyouts to teachers who are in the absent teacher reserve (ATR) for a year without being offered a permanent position. The ATR pool currently has 831 teachers. Only 31 percent in the pool have been taken out of the classroom for disciplinary reasons.

The city continues to pay the salaries of those teachers. The average salary for a current individual in the ATR pool is $82,420 and almost $84,000 for those who have been in the pool for over a year, according to the DOE.

Walcott said the proposed buyout “would reduce a significant burden on our budget, allowing us to divert millions of dollars back to schools.”

Numbers aside, a clause introduced in 2007 offered a buyout to teachers after a year without full time positions, yet after five years, neither the UFT nor the DOE have managed to agree on the details. Both sides continue to point fingers at each other as reasons for no deal, but promised to resume negotiations next week.

Gov. Cuomo has given a Jan. 16, 2013, deadline for the new system to be agreed upon to prevent the school system from losing federal grant money.

“If the new evaluation system isn’t in place by the beginning of next school year, I will implement a new policy,” Walcott announced Thursday morning, explaining the policy would remove any teacher from the classroom with poor performance marks two years in a row.

This system is actually already currently in place, but under the discretion of the principal, who has an option to give a teacher a third year to improve. Walcott’s proposal would simply make the two years the standard.

Whether it is two or three years, how these performance marks will be graded still remains the point of contention, but Walcott appears set to make the policy change with or without a new evaluation system in place.

“If we don’t get to that [new] system by next fall, we are just going to use the one we have to go after teachers who have been rated U two years in a row,” a spokesperson with the DOE said on Monday afternoon. U stands for unsatisfactory.

Negotiations have been ongoing but a DOE spokesperson said there had not been many constructive meetings.

“Everybody probably knows that the best way to accomplish important reforms are to do it collaboratively and that is what I am encouraging,” Council member Garodnick said Thursday evening. “You have people on both sides who feel very strongly in their advocacy for kids in the system and for the student’s sake they need to find ways to work together.”