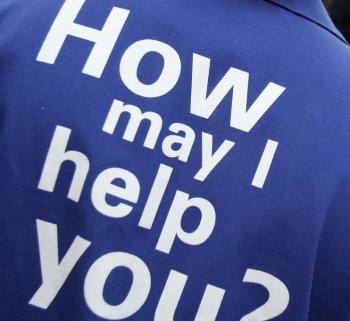 In this file photo, the back of a Wal-Mart store employee uniform is seen at a store in Evergreen Park, Ill. (Tim Boyle/Getty Images)
Business & Markets

Over the last eight years, former and currently hourly workers of the Bentonville, Ark.-based retail giant in a number of U.S. states alleged that the company routinely shortchanged them of overtime pay and forced them to forgo lunch breaks.

The decision to settle 63 wage and hour class-action lawsuits will cost Wal-Mart between $352 million and $640 million, the company announced this week. The settlement charges will reduce fourth-quarter earnings by $250 million, or 6 cents per share.

“Wal-Mart has agreed to continue to use various electronic systems and other measures designed to maintain compliance with its wage and hour policies and applicable law,” the company said in a statement.

“Many of these lawsuits were filed years ago and the allegations are not representative of the company we are today,” Wal-Mart executive vice president and general counsel Tom Mars said in the settlement.

Frank Azar, the lead attorney for the suit in 14 states, said that the settlement paves the way for other employers to reach similar accord with its workers. "We hope Wal-Mart's compliance programs will serve as an example to other major retailers," Azar said in a a statement.

Now that the lawsuit is settled and Walmart can return to business as usual, analysts believe that the retailer is one of the companies most likely to thrive during the global recession. Rather than splurging on luxury goods, there has been a noticeable shift in consumer tendency to frequent stores offering goods at lower price points.

According to investment research firm Value Expectations, in the past 9 years, Wal-Mart has been able to grow its sales at a rate greater than 5.28 percent in eight of those years. That’s a level of consistency few retailers can boast.

As more consumers flock to the discount chain, Wal-Mart is in a position to negotiate even lower prices with its suppliers as the economic downturn continues.

“Wal-Mart doesn’t use the power of its brand to protect a premium in the marketplace. The ‘Always Low Prices’ mantra inhibits that,” hedge fund manager David Cohen wrote on SeekingAlpha.com, an investor information site. “But the company doesn’t squander its brand leverage. It turns it on its vendors.”

“The recession means that the squeeze will be on, and as the tempers in the overcrowded Wal-Mart parking lots rise so will the pressure that [it] can apply to already over-taxed suppliers,” Cohen says.

Wal-Mart also did quite well in projecting its image to consumers this holiday season, according to a recent survey by the National Retail Federation (NRF)’s Retail Advertising and Marketing Association. Wal-Mart ranked second among all major retailers in implementing the best holiday TV commercials, coming in slightly behind main competitor Target Corp. NRF released the survey results on Monday.

As a result, the company’s stock has outperformed the market—and its competitors—by a wide margin. Its shares are up around 15 percent year to date, a far cry from the steep losses suffered by the market as a whole—the Dow Jones Industrial Average is down around 36 percent, while the broader S&P 500 is down more than 40 percent on the year.