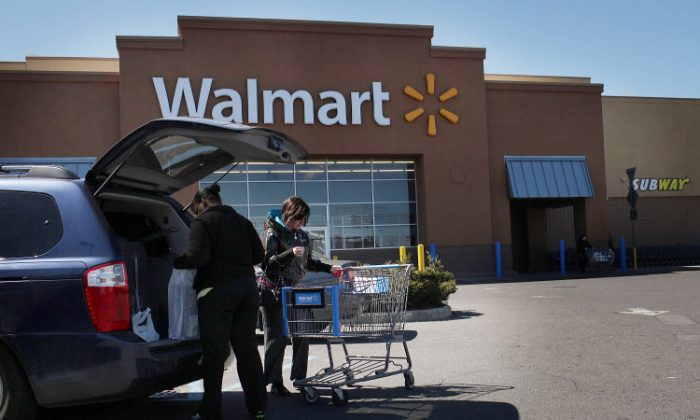 Shoppers put bags in a car at a Walmart store on March 29, 2011 in Valley Stream, New York. The company has been highly criticized for it adverse impacts on wages and small businesses. (Spencer Platt/Getty Images)
Business & Markets

Wal-Mart Stores Inc. launched Project Impact around September 2009. The goal was to have customers walk into a less cluttered and more customer friendly store, as well as to undercut competitors in product categories where their rivals experienced an excellent sales history.

But Project Impact had no visible bearing on profitability in the U.S. market, as Wal-Mart’s sales kept declining during the first half of 2010. Net sales for Wal-Mart U.S. during third quarter 2010 were down 0.1 percent from the same period in 2009. For nine months in 2010, sales revenue was almost flat, having increased by only 0.4 percent over the 2009 nine months sales revenue, while international sales had increased by 13.5 percent when compared to the same period in the prior year.

“Project Impact was pretty much abandoned by late summer of 2010, ending the leadership of then-Walmart U.S. CEO Eduardo Castro-Wright,” according to an article on the Walmart Watch website, which has been critical towards the company and its practices.

In May 2010, Wal-Mart incorporated high-low pricing. The tactic required that a product be “sold every day at a slightly higher cost to customers but marked down considerably during a sale, and other items are marked up to make up for the loss on the discounted item,” according to the Wal-Mart Watch website. It didn’t work, and the approach was dropped.

Wal-Mart’s Everyday Low Prices strategy was retained, and according to retail specialists, can only be sustained by paying low wages, curtailing benefits, and keeping sales people at poverty level incomes.

Subsidizing Wal-Mart
“A secret behind Wal-Mart’s rapid expansion in the United States has been its extensive use of public money,” according to an entry on the Wal-Mart Subsidy Watch website.

Direct subsidies to Wal-Mart include grants from local and state government, including over $1.2 billion in tax breaks, free land use, and low financing costs.

Six states provided Wal-Mart with one subsidy, among them Maryland doled out $12.5 million, New Mexico handed out $6.7 million, and Wyoming extended $6.3 million over the past years.

Indirect subsidies are those that arise from Wal-Mart’s health insurance policy, as more than half of that company’s employees are on public assistance programs, such as Medicaid.

In October 2011, Wal-Mart, after having told the public for months that it had upgraded its health care benefits for employees, rolled back its health care program by curtailing coverage for part-time workers and increasing premiums for full-time employees, citing rising costs.

“Walmart has one of the worst policies for health insurance in corporate America. … Walmart encourages employees to get on public assistance, medicaid and public housing to compensate for low wages,” according to an article on the HubPages website.

Keeping Wal-Mart at Arm’s Length
“Walmart continues its aggressive push to try to open stores in urban communities across the country, and concerned community members and elected officials are speaking out,” according to a post on the November 2011 Walmart Watch blog.

Websites and blogs have sprung up, discussing concerns about Wal-Mart opening a store in a given community. Opposition is growing to Wal-Mart opening six stores in the District of Columbia, according to media reports.

The Southern California Teamsters Joint Council 42 posted a “Say No to Wal-Mart” article on its website, with the latest update on Jan. 5, 2012, and the earliest entry from 2000.

The largest Dutch retirement fund, Algemeen Burgerlijk Pensioenfonds (ABP), announced on Jan. 6 that it would divest from Wal-Mart stores, citing continued violations of international labor standards. Wal-Mart lost an investor that had invested around $150 million in the company.

“Walmart is one of only five American companies to be blacklisted by the Dutch pension fund in 2012. (The other four companies are engaged in the production of clusterbombs),” according to an article on the Making Change at Walmart website.

Outside the United States, Wal-Mart, in addition to its direct competitor Carrefour SA, is excluded from India’s large retail market, despite being involved in getting India’s laws changed, according to Indian media reports.

Wal-Mart and Its Direct Competitors
Wal-Mart has been outpacing its four direct competitors; however, it has not driven them out of the market place.

Wal-Mart and Small Businesses
Proponents of Wal-Mart suggest that Wal-Mart is good for the U.S. economy, as it supports the sitting administration’s goal of creating more jobs and allowing people to buy more because of lower prices.

Opponents counter that it is true that if one spends less on a product, one can purchase something else and come out ahead. But it doesn’t take into account Wal-Mart’s ability to purchase items in large quantities, which are made not in America, but in various Asian countries, including China and India. Buying overseas saves Wal-Mart taxes that would have supported local and state cash-strapped or near-bankrupt communities.

The Wal-Mart strategy has enriched the Walton family. Christy Walton, Jim Walton, and Alice Walton are among the 10 wealthiest people in America, having accumulated $24.5 billion, $21.1 billion, and $20.9 billion respectively, according to the latest Forbes 400 list of the richest people in America.

Yet many say that the Wal-Mart strategy has put more small businesses out of business and kept more working people below the poverty level than any other company can take credit for during this century.

Labor unions, former workers, the public at large, and many other opponents to Wal-Mart’s unfair competitive policies and irresponsible corporate behavior have been quite vocal, asking people to stop buying from Wal-Mart.

A domino effect ensues when Wal-Mart sells products below prices that a smaller business can’t match and thus not only eliminates valuable jobs in a community, but also squeezes the life out of smaller U.S. towns.