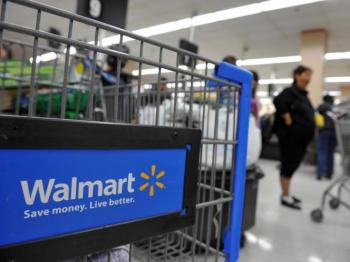 The world's largest retailer Wal-Mart Stores Inc. has announced that it will end profit-sharing contributions that have been automatically distributed since 1971. (Robyn Beck/AFP/Getty Images)
Business & Markets

Caroline Dobson
View profile
Follow
biggersmaller
Print
Wal-Mart Stores Inc., the world's largest retailer, has announced that it will end profit-sharing contributions that have been automatically distributed since 1971.

The overhaul will be replaced by up front cash payments instead, rather than being accessible at retirement, according to spokesperson David Tovar.

The largest private employer in the United States claims that the replacement employee benefits package will be more beneficial in terms of sharing the company’s financial gains.

From February 2011, the retirement plan contributions will be up to 6 percent of pay, based on the assumption that workers opt for the new scheme and contribute an equal amount based on a memo provided to the Associated Press.

The breakdown of the payment of the current plan is equivalent to a maximum of 4 percent of the compensation of employees who have worked in excess of 13 months for the retail giant.

"Associates have the potential to get more bonus money up front instead of getting a contribution from the company that they could not touch until they retire," Tovar said in a Reuters interview.

Employer matches to workers’ contributions help employees increase savings and provide an incentive for them to contribute, said Nancy Hwa, a spokeswoman for the Washington-based Pension Rights Center.

Sam Walton, the company’s cofounder, devised the existing profit-sharing structure. The company did not verify whether the new benefit scheme would be advantageous to Wal-Mart, financially.