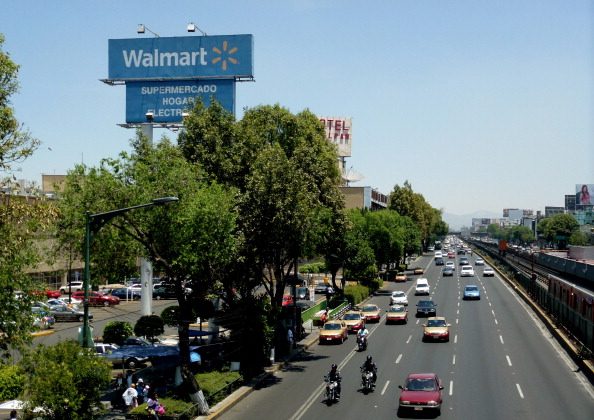 View of a facade of Walmart supermarket in Mexico City, on April 26, 2012. (Yuri Cortez/AFP/GettyImages)
Americas

Wal-Mart Bribed to Get What it Wanted in Mexico, Report Claims

A recent report has detailed Wal-Mart’s bribing of Mexican officials to open a number of stores throughout the country.

A New York Times investigative report shows that there were at least 19 instances where Wal-Mart’s subsidiaries payed off local Mexican officials in order to open more than a dozen stores in desirable spots.

“The Times’ examination reveals that Wal-Mart de Mexico was not the reluctant victim of a corrupt culture that insisted on bribes as the cost of doing business. Nor did it pay bribes merely to speed up routine approvals,” the Times said.

It added that instead, Wal-Mart was “an aggressive and creative corrupter” and handed out large payoffs to officials. The world’s largest retailer bribed to “subvert democratic governance — public votes, open debates, transparent procedures. It used bribes to circumvent regulatory safeguards that protect Mexican citizens from unsafe construction. It used bribes to outflank rivals,” the article said.

According to the article, Wal-Mart gave an official $52,000 to redraw a 2003 zoning map that prohibited commercial development on a field located near the pyramids of Teotihuacan. The company believed that the desirable location would bring in 250 customers per hour.

The paper said that Wal-Mart arranged middlemen and lawyers to deliver the cash in envelopes to officials so that they would not be traced back to it.

In all, the store provided millions in bribes to open many of its stores in Mexico, including paying $341,000 to build a Sam’s Club in a densely-populated neighborhood in Mexico City. The store was built without a construction license, an environmental permit, or an assessment on the urban impact, the report claims.

In a statement, Wal-Mart said that the allegations in the Times reporting about permitting and licensing process for its store in Teotihuacan were already known.

Those claims “have been part of the company’s ongoing investigation of potential violations of the U.S. Foreign Corrupt Practices Act we began more than a year ago,” David Tovar, Vice President, Corporate Communications, said in a statement.

He added: “At this point, the investigation is still ongoing and we have not yet reached final conclusions. A thorough and independent investigation will take time to complete. We wish we could say more but we will not jeopardize the integrity of the investigation.”