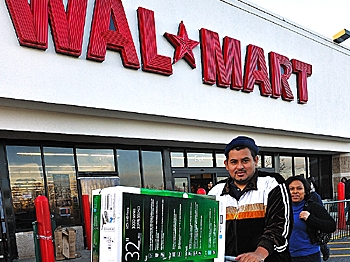 Heide B. Malhotra
View profile
Follow
biggersmaller
Print
America is a land of opportunities, where companies find new ways of luring the consumer through their doors.

Discount chain Wal-Mart Stores Inc. is one of the most adept in cornering the low- and middle-income market and reported a 2.8 percent increase in sales during the second quarter of 2010, despite cautious spending by consumers.

Now, Wal-Mart appears to be making a foray into banking. Today, when credit has dried up from traditional banks, other companies are trying to fill that niche, and one of them is Wal-Mart.

Since 1999, Wal-Mart has tried everything possible to give banks a run for their money when trying to establish an industrial loan company (ILC). ILCs allow commercial and manufacturing firms to extend credit and offer customers a way to finance purchases.

“Despite being pilloried by the public lately, a banker’s lot can’t be all that bad. At least, that’s what Wal-Mart executives must be thinking,” according to a recent Knowledge@Wharton (KW) report on Wal-Mart.

“Over the past year, they have unveiled one plan after another aimed at getting a bigger share of the U.S. retail banking market, which could be good news for some and bad news for others.”

But the banking sector and industry watchdogs bombarded the Federal Deposit Insurance Corporation (FDIC) with hundreds of letters, demanding that three Wal-Mart applications for the purchase of a bank be thwarted.

“The FDIC received more than 1,500 letters from banking officials and watchdog organizations protesting Wal-Mart’s banking charter application. Wal-Mart withdrew the application in 2007 after heavy lobbying against the move and a much-delayed approval process at the state and national levels,” according to the KW article.

Experts believe that Wal-Mart is highly tenacious and are certain that the firm is quietly working on getting a banking charter in the United States, despite past setbacks.

“The steps the regulators have taken to [block] its charter application have been egregious. Wal-Mart is fighting a good fight, and with persistence it will get there. It will just take time,” said Joseph R. Mason, professor of banking at Louisiana State University, in the KW article.

It’s not all bad news. Wal-Mart had more luck in Mexico and Canada. In 2007, Banco Wal-Mart opened doors with about 80 branches in Mexico, and the company hopes to double the count by the end of 2010. In Canada, Wal-Mart was granted a Canadian banking license and has so far rolled out a credit card.

The Underbanked and Unbanked

Predictions are that by 2015 the U.S. banking sector will shrink by 2,700 banks or close to 40 percent, either through bankruptcy or merger activities, according to an Oliver Wyman “State of the Financial Services Industry 2010” report.

The above statistic raises the question as to what happens to the unbanked and under-banked, or customers who due to their personal income circumstances are unattractive to traditional banks.

At December 2009, about 17 million adults did not have any dealings with banks, and 43 million adults had a combined checking and savings account, according to a study by the FDIC.

A little over 70 percent of banks are aware of the unbanked and underbanked market, but don’t see any benefit in going after them as customers.

“If Wal-Mart can make it convenient, safe and doable for that slice of the population [to bank with them], it will have a market,” said Nelson Lichtenstein, professor at the University of California, in the KW article.

Lichtenstein suggested, “Many of these people live on a cash basis and are afraid of banks. But they are not afraid of Wal-Mart.”

Erosion of Public Confidence in Banks

The banking sector has taken a hit, and customer confidence in banks is at an all-time low. Banks are seen as unethical, irresponsible, unacceptable risk takers, greedy, and having amassed too much political power, according to public opinion polls.

Going further, the public believes that the banks are hoarding money, spending it on bonuses or acquiring other banks, instead of using bailout funds from the U.S. taxpayer for lending and job creation activities.

The public outcry for consumer lending is getting rather vocal, but banks have not opened their pocketbooks with regularity as the economic situation is still tenuous.

“Despite urging from the White House and the Treasury Dept., banks aren’t lending. Instead, they’re hoarding money to bolster their own balance sheets. That’s not helping consumers or the overall financial situation, and in the absence of consumer credit, the economy is stuck in reverse,” according to an article on the MortgateLoan.com website.

Differing From the Run-of-the-Mill Bank

ILCs operate under a state charter, but at the same time may be insured by the FDIC’s deposit insurance program, thus falling under the regulatory auspices of the FDIC.

Generally, a commercial firm may not own or operate a depository institution, but an ILC may be owned and operated by a commercial entity. Thus it differs from the run-of-the-mill bank, as it avoids the prohibition of combining commercial with banking activities.

ILCs may carry out almost all types of banking services although owned by commercial firms, raising the question of transparency, conflict of interest, and competitive factors. Many companies own ILCs, such as American Express Co., General Electric Co., Harley-Davidson Inc., Pitney Bowes, and Target Corp.

The ILC market has grown to a billion dollar business, growing from $12 billion to over $200 billion from 1995 to 2006 (recent figures not available), according to an article on The Hill.

In 2010, the sitting administration attempted to regulate ILCs along with the rest of the banking sector. Large corporations, joined by Sens. Bob Bennett, R-Utah, and Harry Reid, D-Nev., went into action to thwart the effort to impose regulatory functions.

“A bill crafted by Senate Banking Committee Chairman Chris Dodd (D-Conn.) includes a temporary moratorium on new ILCs and a requirement to study the issue, but stops short of imposing sweeping new oversight on the industry,” according to The Hill.